Of Time & The City 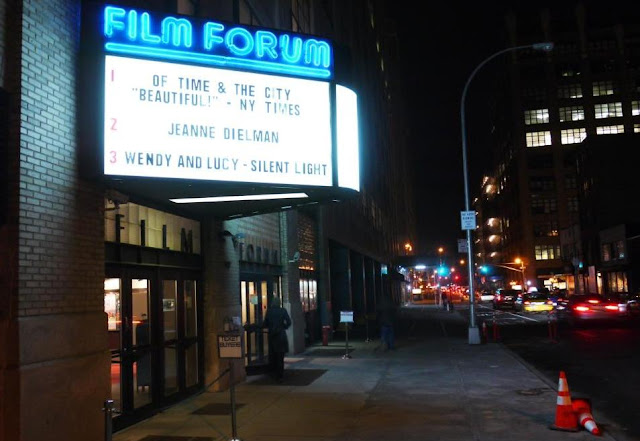 The Film Forum, on Houston near Varrick, is one of the City's best places to see a movie. Old film noir, new foreign and independent films are their fare. Last night we saw the amazing Of Time & The City, which recreates/recalls postwar Liverpool through gorgeous archival footage, a lush soundtrack of Peggy Lee, Mahler and Bruckner, and the dry narration of writer/director Terence Davies. Truly a landmark film for lovers of the past...like me! Where do you see independent films in your town?
Posted by Ken Mac at 10:54 AM

Landmark and Laemmle theatres show a lot of indies, here.

I hate to break this to you KM, I have no clue. Probably nowhere if I want to be really truthful. B'ham's not really a "hot bed" if you know what I mean. Well, we will be when the Cheyenne pulls into town. Whooo eeeeee!
V

Film Forum was always a favorite back in the day when i worked on Varick Street. that was back pre-1989. when our kompany moved down to the Wall Street area, for some strange reason i just stopped visiting FF. i believe that the last film i watched there was Tod Browning's FREAKS. {great one}

since then i've been frequenting The Angelica {love the rumbling}, Kaufman Studios in Astoria {classics at $4 a pop, not bad}, and more recently IFC Center on 6th Avenue {currently showing CHE Pts 1&2, bring a cushion}.

but, what i really wanted to ask you: do you remember the Bleeker Street Cinema on . . . er, uhm, . . . Bleecker Street? {i believe that it appeared in one of Woody Allen's fims} i loved that theatre, o'course this was pre yuckification.

then there was another theater up on 57th Street, now that's the one i'd like help with. what was its name?

it showed artsy films, but mostly it showed classics ala FF. i really miss that place. o'course it helped that it was a skip from the old Coliseum Bookstore.

i gotsta tell ya, i love visiting your blog.

its NY like it was meant to be: grimy and dirty at times, but great architecture, great art inside and out, real people on the street, and the vibe, man, the vibe just flooding the streets. man, where'd it go?

ya think maybe we're exchanging addresses with the new arrivals
but we just don't know it yet?

hey! with regard to the Regency, i wuz gonna say no, i didn't remember it.

but i googled it and now actually i do remember, i went there only once, and i saw the Marx Bros' DUCK SOUP.

just once, mind you, but i should'a remembered 'cause i was with a young lady that made that day memorable, if not exactly for the theatre.

anyhoo, when i googled the Regency i came up with this site: Cinema Treasures, http://cinematreasures.org

and there i found the name i was looking for, and strangely enough, its history is linked to The Regency!

izzat cool or what?

hey, thanks again. and keep up the good woik!

*sheeesh* the name of the theatre was Biograph Cinema on West 57th Street. :-)

We don't and that bugs the hell out of me. Now it's at home a screen projector onto a wall and beg borrow or if necessary steal anything and everything film related.
For an island that makes films you'd think we would wake up to the fact that we need an arthouse/noir.world/ cinema in addition to the mainstream. A shed would do. I envy you. Spookily vacant scene and apologisies for another diatribe.

How on earth do you keep up with so much blogging? I like your work and chuckle because often you have already visited a photography blog by the time I find it!

We're in Greensboro North Carolina and new to the daily photo scene (three weeks). Stop by if you get a chance.

We have the Ritz theaters in Philly, the Colonial in Phoenixville, and some multiplexes SOMEtimes dedicate one screen to films that have enough buzz. Otherwise, it's my livingroom!

Sentimental huh Ken? OK. We have a movie theatre that specialises in not-so-popular movies too. It has a reasonable following.