Use What is Dominant in a Culture to Change It Quickly 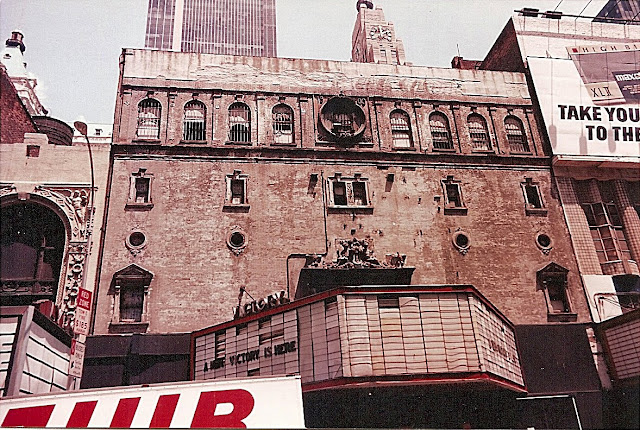 Built in 1900 as the Theatre Republic, the architecture and design of the theater heralded a new era in showmanship and exhibition. In 1902 it was renamed the Belasco Theatre. By 1914, the theater was renamed again as the Republic. The theater continued its run as a legitimate theater until 1932, when it became Broadway's first burlesque house. 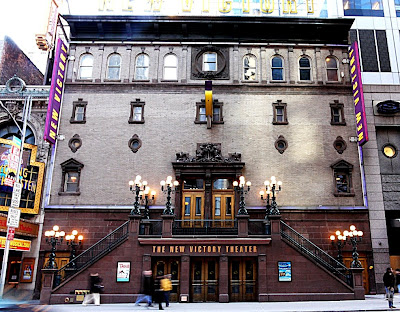 By the 1940's, the theater was renamed Victory and began to show second-run movies. When 42nd Street's fortunes plummeted in the 1970s, the Victory became the first to show pornographic movies and continued doing so into the late 1980's. 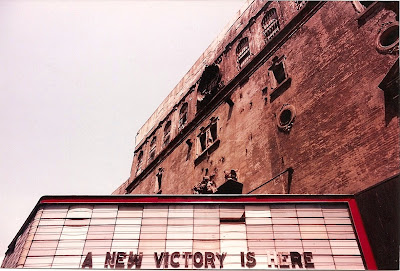 In 1990, the Victory came under public ownership, in an effort to revitalize 42nd Street. Leased to a nonprofit organization, the theater's renovation began in August of 1994 and was completed in December 1995 at a total cost of $11.4 million and renamed New Victory.

now billed as New York's Theater for Kids and Families, and currently showing "Cranked." (Had to go look the old lady up and see how she's doing.)

They did a good job of renovation on this one.

I am a relatively new reader of your blog, and I must say - it is fantastic. I especially love the 42nd Street and Times Square stuff you're doing right now.

When I moved to NYC in the early 90's, Times Square was still seedy. Now it's shiny and scrubbed and tourist-friendly. Seeing those old pictures brings me back to a time when I was young and bright-eyed and was exploring this great city.

Thanks for all you do.

another fun before and after sequence. thanks.

hey,
i used to work at the "Daily Planet" {top, right-of-center} partially shown in the before picture.

*brrrrrrr* i get chills just thinking of my old boss.

its weird. i'm happy that the deuce is clean and safe. and i don't miss the "red light" stuff.

maybe its nostalgia, but there's a certain "yo no se que" missing.

its TOO clean, if that makes any sense.

anyhoo, thanks again. its always a pleasure dropping by.

I think it's a wonderful renovation with that staircase, grand doors and lovely lamps. The pale wall with the dark frames show off those unusual tiny windows so well. NYC did very well with this one. It's a regular cinema again now?

Wow what a good job they did on that building, it is beautifull, Great that they had an eye for the artistic value.
Love your blog, and your latest entries, an interesting read. I liked this last one, not everything is replaced!
Cheers from Marcel