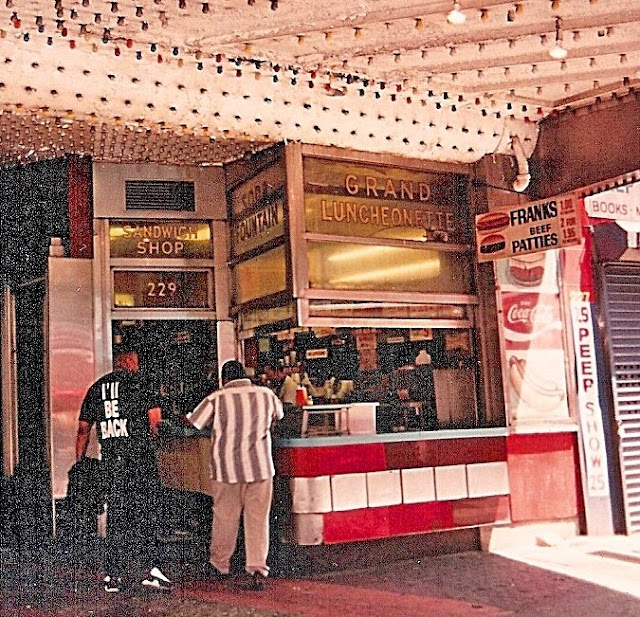 New York Times, 10/29/1997: “Most of the regulars could be found at the Grand Luncheonette yesterday, parked on the stools or bellied up to the counter. 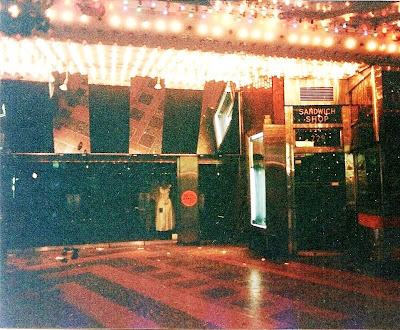 “There was Abdul El-Amin, who started coming regularly 25 years ago for knishes after kung-fu movies. There was Officer Charles Mitchell, who has patrolled Times Square for a decade and often stopped by for a hot dog (95 cents) with sauerkraut (5 cents extra). And there was Pops, a toothless 42d Street regular who could not remember exactly how long he had been eating there. 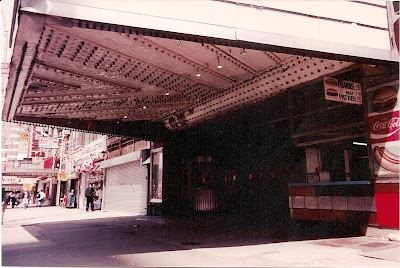 “As he has for 58 years in the neighborhood, Fred Hakim, the owner, wore his stained white fry-cook's jacket and dished out fare as delectable as it was profoundly greasy. He enforced the prohibitions tacked on the mirror behind the counter: ''No Loitering. No Spitting. No Water. No Ice.'' And he held forth as a humble historian of the Deuce, as he still likes to call 42d Street west of Seventh Avenue.  But Mr. Hakim, 69, had a hard time keeping it all from sounding like a valedictory. After more than 25 years in its closet-sized space at 229 West 42d Street, the Grand Luncheonette spent its last day on 42d Street yesterday.

“It is being closed as part of the Times Square redevelopment project, which has shuttered dozens of the neighborhood's older businesses -- many of them sex-oriented -- to make way for sparkling new restaurants, theaters and retail stores.”

Everything has a beginning and an end, though it's sad to old landmarks close.

It sounds like Cheers! How sad that it's closing.

one of my favorite places on earth.

See - this is the stuff that makes us real. Thanks, as always, for sharing.

I guess it's like they say; all good things come to an end. But, I find it very sad, sometimes I don't like progress very much!

I think those photographs there were actually taken in 1990.

Hello everyone. On a very sad note, my father, Fred Hakim, who was the proprietor of the store for decades (and his father before him) is terminally ill with cancer. He is in hospice and the doctors say it is likely hours or a day or so. He suffers from aggressive cancer. He loved the store, 42nd street and, most of all, the people who patronized it. These pictures are timeless and, to our family, priceless. It captures him, times square and the store perfectly.

If you happen to have any additional pictures or videos that you don’t mind sharing, we’d be very appreciative.