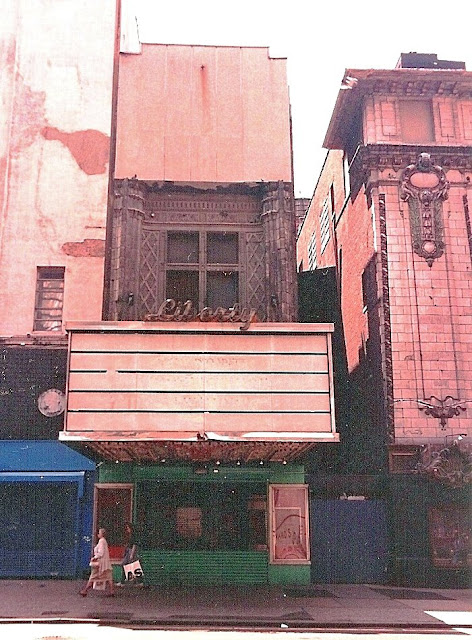 NYTimes: Tucked away behind Madame Tussaud's is the dusty, cavernous Liberty Theater. The Liberty, which had more than 1,000 seats, was once a center of American musical theater. Designed by Herts & Tallant in 1904, the architects of the New Amsterdam Theater on the same block, it introduced shows by Cole Porter, Jerome Kern and the Gershwins. The second show produced there was George M. Cohan's ''Little Johnny Jones,'' whose songs included ''The Yankee Doodle Boy'' and ''Give My Regards to Broadway.'' 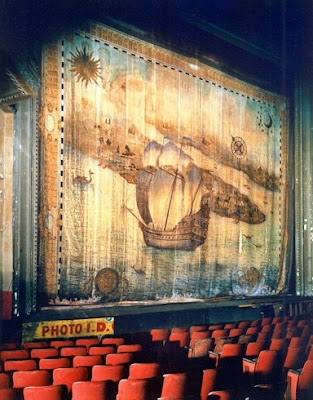 ''New York has a real theater shortage,'' she said. ''There's not enough large-scale Off Broadway houses, so when we come to town, we have to go to BAM, the real national theater of your country. The Liberty should be a theater run by a nonprofit. I would like to run it.'' She paused before adding, ''You certainly don't need another nightclub.''

Someone needs a soul transplant.

A lot of our old theatres have been turned into concert venues, and preserved the outside of the building and lots of details. How sad to see that building gone.

New Orleans has some real old gradiose theaters that have been shuttered for years. But it seems some tax incentives may change that in the near future.

Hi Ken - I added a few details to my "Old Man, Abandoned Building."

have a soft place in my heart for old theaters (not the seats, mind you!).

'We need these theaters for our souls.'.... Yes, I think she's right. After all much of the world's musical shows originated in the USA, and problably here? - Dave

The renovation - Disneyfacation - of Times Sq caused the loss of not just theatres but also some amazing old architecture in the other buildings razed for the glass facade skyscrapers (including the one I work in) .... however the Bank America Tower which spans 42-43 Sts has on its 43 St side retained the facade of Henry Miller's Theatre (last show to play there was Urinetown)incorporating it into new bldg. A classy touch!

I enjoy seeing these old photos of New York!

what is this mall masquerading as new york city?