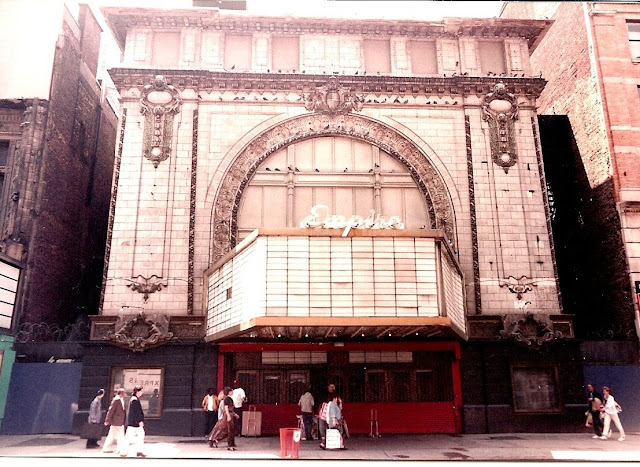 Built in 1912 as the Eltinge Theater (named for famed female impersonator Julian Eltinge), this imposing Romanesque (Rococo? Italianate?)  structure eventually became The Empire Theater, sometime during 42nd Street's journey from legitimate theater destination to burlesque to movies.  This shot was taken in 1992, the day the plans for "42nd Street Now!" were announced, signalling the street's (the "Deuce)" transformation from  seedy glory to Disney nightmare.  Currently an AMC theater, which you can't miss. A beautiful restoration, nonetheless. 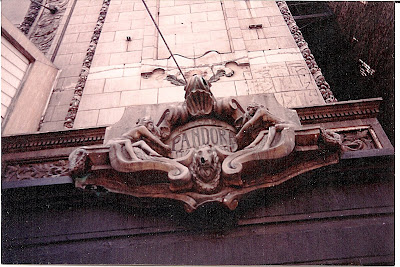 Reno yes, but I hatea that garish neon sign. Well it's still there anyway. We had an Empire Theatre here too. Not as glam as the Alabama that I have featured recently but I saw some fine Doris Day movies there in my day. Nice that this time you had a pleasing AFTER to your BEFORE, KM.
V

I prefered the old theatre. Yes, I think the red sign spoils it. - Dave

Not all change improves things. Great to see these before and afters.

I could not believe the difference between Midtown 1988 and now.

i'm glad that the owners were able to preserve the facade, for the most part.

i'm even happier that the windows were opened up, and the rooftop balcony was a nice addition as well.

i do miss the two movies for two bucks, though. times were tough, but New York allowed for the working class.

here's a positive: Look at how many people ride bikes (or are expected to ride bikes).

It looks like you're taking a trip down memory lane, KM. It's really interesting to see all the changes.

Well I have a great idea. When the Cheyenne gets ready to open, YOU come on down.. Maybe a little B"ham media coverage? HUH? How much would that be KM????

The Empire's shell was actually moved down 42nd Street from its original location to its present spot, where it was cleaned up and became the entrance lobby for the AMC multiplex.

i believe they moved other theatres as well on 42nd. Soon I will be posting a before and after of the Lyric. And they look nothing alike...even beyond restoration.

Its a nice looking building, though I don't rate the neon sign much (and I'm a neon lover!) At least it's still used as it was intened.

Always good to renovate and reuse these old buildings. Except for the garish part. On the bright side it wasn't torn down.

I think the style is Art Nouveau. Very nice in any case, with any name!

Love your site -- the gritty before pics and the now pics. Great overall look.

Weekends to peopleig2tmean that they can have a two-day wowgold4europe good rest. For example， people gameusdcan go out to enjoy themselves or get meinwowgoldtogether with relatives and friends to talk with each storeingameother or watch interesting video tapes with the speebiewhole family.
Everyone spends agamegoldweekends in his ownmmoflyway. Within two days,some people can relax themselves by listening to music， reading novels，or watchingogeworld films. Others perhaps are more active by playing basketball，wimming ormmorpgvipdancing. Different people have different gamesavorrelaxations.
I often spend weekends withoggsalemy family or my friends. Sometimes my parents take me on a visit to their old friends. Sometimesgamersell I go to the library to study or borrow some books tommovirtexgain much knowledge. I also go to see various exhibition to broadenrpg tradermy vision. An excursion to seashore or mountain resorts is my favorite way of spending weekends. Weekends are always enjoyable for me.
igxe swagvaultoforu wowgold-usaignmax wowgoldlivebrogame thsaleGoldRockU

Generic Viagra (sildenafil citrate; brand names include: Aphrodil / Edegra / Erasmo / Penegra / Revatio / Supra / Zwagra) is an effective treatment for erectile dysfunction regardless of the cause or duration of the problem or the age of the patient.
Sildenafil Citrate is the active ingredient used to treat erectile dysfunction (impotence) in men. It can help men who have erectile dysfunction get and sustain an erection when they are sexually excited.
Generic Viagra is manufactured in accordance with World Health Organization standards and guidelines (WHO-GMP). Also you can find on our sites.
Generic [url=http://viagra.wilantion.ru]Viagra 100mg pills[/url] is made with thorough reverse engineering for the sildenafil citrate molecule - a totally different process of making sildenafil and its reaction. That is why it takes effect in 15 minutes compared to other drugs which take 30-40 minutes to take effect.
[b]indian viagra dangers
Viagra My Emancipation
Recommended Dosage Of Viagra
Viagra Spoof
viagra bank fraud
viagra eurovision
chinese herbal viagra
[/b]
Even in the most sexually liberated and self-satisfied of nations, many people still yearn to burn more, to feel ready for bedding no matter what the clock says and to desire their partner of 23 years as much as they did when their love was brand new.
The market is saturated with books on how to revive a flagging libido or spice up monotonous sex, and sex therapists say “lack of desire” is one of the most common complaints they hear from patients, particularly women.

hey amazing blog about Empire Theater 42nd Street Then & Now thanks for sharing and do you have any update?

This information is very interesting, I really enjoyed, I would like get more information about this, because is very beautiful, thanks for sharing! costa rica investment opportunities

Hello .. firstly I would like to send greetings to all readers. After this, I recognize the content so interesting about this article. For me personally I liked all the information. I would like to know of cases like this more often. In my personal experience I might mention a book called Generic Viagra in this book that I mentioned have very interesting topics, and also you have much to do with the main theme of this article.

You have a very good blog that the main thing a lot of interesting and useful! erectile dysfunction