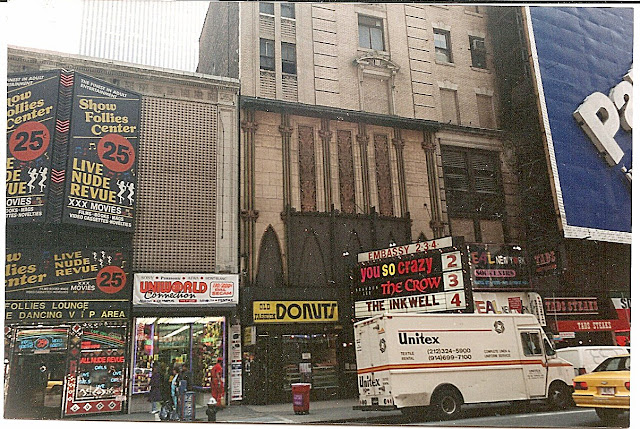 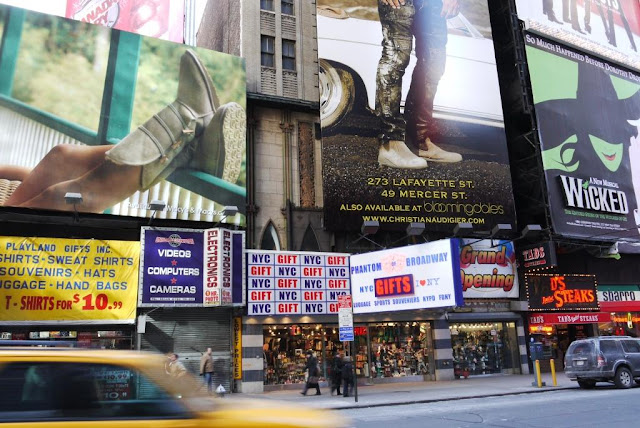 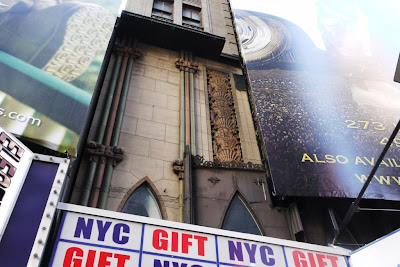 donuts between movies and smut. sounds about right.

Amazing how much its changed in only 10 or 11 years.

Its a shame this photo is all that remains of them.

I like the idea you could grab a soft warm donut and head into the cheesy girly flicks or shows or .....
Sad really.
V

Right. I'd like to see what it looks like today. I remember this street and Tad's. Used to go to concerts at Town Hall nearby (43rd?).

So what's happened to the street since? Lemme guess. A 60-storey office block that looks like it was rolled out of a stamping press.

Love this photo! Very much NY!

Have a nice weekend!

No, no, no. Remember? They need only take the Sex and the City tour to get the group trip into the little Pleasure Chest store down near St. Vincent's.

I feel better knowing the good stuff is safe from the tourists. ;)

I also wonder what is there now.

Looks great but a little old fashioned. My how quickly fashion changes. Is it all glass and neon now?

thanks the heads up...man, there is nothing left

Looks more like they just stuck new facades on the buildings. What a jumble. I wonder if anyone even notices all the signage.

Thanks for posting the current view.

Thanks for the heads up Ken. Nice work.

KM
Here's a story to warm your heart. A NY diner is being moved to Birmingham and being saved from the wrecking ball!!!! Now you will have to come for a visit!
http://blog.al.com/spotnews/2009/01/a_classic_new_york_city_diner.html

Thanks for posting that current view, because I've lived here only 14 years and worked in TSQ for some of it, and *I* didn't recognize the block. Even with the crosstreets listed.

Wow, what a change!Typical NY scene in the 2nd pic!

Wow! What a change. Thanks for putting in the now picture.

Its great to see the follow up photo. Thanks :)

Thanks for posting this. The old photo is amazing, and I'm glad I got to see that era of NYC before it was erased. HOWEVER, your comparison is INCORRECT. THESE PHOTOS WERE NOT TAKEN FROM THE SAME VANTAGE POINT. The old photo is 49th St. and 7th Avenue. The bottom photo at Broadway and 49th is correct. At least one of the facades in the old photo still exist. The Embassy Theater facade (which was the originally the Mayfair Theater in th 30s and 40s) still remains. It was recently renovated and turned into a NY souvenir tourist trap store. Go up there and check it out. You can still see the arched windows that are above the maquee. I believe the building where the porn theater was also remains but it is now something else.

Viva, thanks for that correction. Everything is so different now, the only thing I could find to use as a bearing point was the background skyscraper. But I will go up tomorrow and take a corrected shot. Thanks! watch this space..more to come..

wow! what a blast. i'd almost forgotten. thank you.

Live Nude Revue for only 25 cents. What a deal. Wonder what the dead ones cost.

I'm loving the retrospectives mixed in with the current views.

Weekends to peopleig2tmean that they can have a two-day wowgold4europe good rest. For example， people gameusdcan go out to enjoy themselves or get meinwowgoldtogether with relatives and friends to talk with each storeingameother or watch interesting video tapes with the speebiewhole family.
Everyone spends agamegoldweekends in his ownmmoflyway. Within two days,some people can relax themselves by listening to music， reading novels，or watchingogeworld films. Others perhaps are more active by playing basketball，wimming ormmorpgvipdancing. Different people have different gamesavorrelaxations.
I often spend weekends withoggsalemy family or my friends. Sometimes my parents take me on a visit to their old friends. Sometimesgamersell I go to the library to study or borrow some books tommovirtexgain much knowledge. I also go to see various exhibition to broadenrpg tradermy vision. An excursion to seashore or mountain resorts is my favorite way of spending weekends. Weekends are always enjoyable for me.
igxe swagvaultoforu wowgold-usaignmax wowgoldlivebrogame thsaleGoldRockU

Generic Viagra (sildenafil citrate; brand names include: Aphrodil / Edegra / Erasmo / Penegra / Revatio / Supra / Zwagra) is an effective treatment for erectile dysfunction regardless of the cause or duration of the problem or the age of the patient.
Sildenafil Citrate is the active ingredient used to treat erectile dysfunction (impotence) in men. It can help men who have erectile dysfunction get and sustain an erection when they are sexually excited.
Generic Viagra is manufactured in accordance with World Health Organization standards and guidelines (WHO-GMP). Also [url=http://twitter.com/tlkzfdn]Cheap Viagra 25mg[/url] you can find on our sites.
Generic [url=http://wumenalu.freehostia.com]Best Price 100mg Viagra[/url] is made with thorough reverse engineering for the sildenafil citrate molecule - a totally different process of making sildenafil and its reaction. That is why it takes effect in 15 minutes compared to other drugs which take 30-40 minutes to take effect.
[b]Viagra Natural Mexico
Viagra Online Reviews
jan michael vincent viagra
viagra giving a man an erection
viagra u s pharmacies
viagra cialis prescription online
viagra sheet off leg
[/b]
Even in the most sexually liberated and self-satisfied of nations, many people still yearn to burn more, to feel ready for bedding no matter what the clock says and to desire their partner of 23 years as much as they did when their love was brand new.
The market is saturated with books on how to revive a flagging libido or spice up monotonous sex, and sex therapists say “lack of desire” is one of the most common complaints they hear from patients, particularly women.