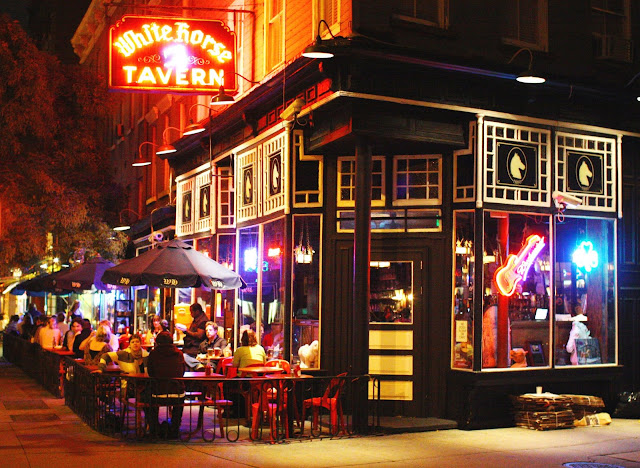 The most celebrated watering hole in the West Village has its ghosts.

Poet’s Org: The White Horse Tavern, built in 1880, has been a stomping ground for New York’s literary community since the 1950s when the bar’s most famous patron, the Welsh poet Dylan Thomas, was introduced to this longshoreman’s haunt. The White Horse holds the dubious distinction of being the place where Thomas drank his last whiskey. In November of 1953, Thomas beat his own personal record by downing eighteen shots of whiskey. Soon after the last drink he stumbled outside and collapsed on the sidewalk. He was taken to the Chelsea Hotel and there fell into a coma; the next morning he was transferred to St. Vincent’s Hospital where he died.

If Thomas is haunting the pub, he's not making himself a nuisance. "He's never a bother," says owner Eddie Brennan. In fact, the ghost may have provided at least one worker with a few free drinks. A porter hired to carry kegs down to the basement often told Brennan he heard footsteps in the bar and found an empty beer glass and shot glass on Thomas' favorite table, near the radiator in the middle room.

The bar soon drew more literary figures as patrons including James Baldwin, Norman Mailer, and Anais Nin. The bar was also a gathering place for both the Beat writers, like Allen Ginsberg and Jack Kerouac, as well as the New York School poets, such as John Ashbery and Frank O’Hara.

Bob Dylan was a regular here in 1961, often to watch the The Clancy Brothers play.

Okay. This is absolutely MY FAVORITE ALL TIME KM SHOT!

I love it. ANd love the history, too.

Love the colors in this and the history is way cool!

The White Horse has a lot of character....you grabbed it! No problem posting the comment regarding SP.
Lori

That is a great shot! Wonderful!
You know - your imagery would fit perfectly into our new Meme, that my Skywatch Buddies and I just started.
http://showyourworld.blogspot.com/
And a good way to get more visitors, too. You sure deserve that!
Cheers, Klaus

Love the White Horse neon sign and the color in this photo! The history in the post is fascinating! Wonderful!

KM, WHere in the hell was I when you put this up?
I love this one. Just like Laurie, it may be my favorite but I would have to do some research. The neon ROCKS! I want this one.

PS: Unfortunately my book haven't a translation to English, if so would be my pleasure to send an exemplar to you.
Give a big hug to your Mom!

This is so refreshing to see establishments like this that are not chain shops. Love the night shot here.

How could you forget the most respected village resident, the late Jane Jacobs?

I love it ! Very creative ! That's actually really cool Thanks.