The Abomination of Desolation

This is probably a New York centric post, but this is about criminal behavior, the end result of massive, out of control gentrification running amok, of Big City Greed (equals Bloomberg) and too much $$$$$$$$ turning ugly, putrid, venal and stench filled. Here we have the former location of everything "New York" aka CBGB's, the home of US punk and bands like Blondie, the Ramones, the Velvet Underground and Patti Smith turned into a shopping haven for rich kids slumming the past. The abhorrent capitalists at John Varvatos even mock CBGB's original awning with their black, shroud like awning. And that's not all:

New York Times: "In a vivid example of the culture clashes of the new Bowery, in which the old zone of poverty and bohemianism is quickly being transformed into Manhattan’s latest luxury district, Mr. Varvatos has created a slick simulacrum of the old club to help sell $250 shirts and $2,000 jackets. "
When I first arrived in NY in the late 80s, a walk down Bleecker to CBGB's was dangerous in itself, never mind the club. Once inside, your ears were blasted by bands who made CBs their first destination. I can't count all the great bands I saw here. But now, like the rest of the neighborhood, CBs is over and the designer crowd who lives in the nearby mega million dollar condos have control over the entire city. Rant over. 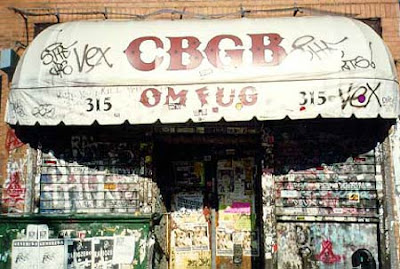 If Debbie Harry sang there that would be enough to turn it into a shrine in my book.

Maybe the failing world economy will force us to rethink the $250.00 shirt. Not that I've ever spent more than $20.00 for a shirt in my whole life.

Ouch, that's an angry rant. I feel your pain. Now, take a deep-deep breath. Sip a cup of green tea. And, breathe again. ;)

And, sorry but I still don't know what Bloomberg has to do with all this. He's the mayor, not the owner of that building, or a realty promoter, or the savior of every business of the city.

Ken...I am enjoying your tour of the City and learn a lot as I read each post.
Lori

I take it back: I don't think green tea will help. I would go straight to herbal tea in your condition - you know, something soothing.

Ken, your opinions show a healthy concern for the world around you. Rant on.

I don't know about herbal tea but I've heard it can lead to the hard stuff, like crystals, tarot cards and high colonics. It could be a downward spiral.

Stick to green tea is my opinion, which is considered less than useless in most circles.

Please keep snappin' and rantin'. It may not stop the plastering over with plaster o' greed, but then you never know ...

Jeez. I thought LA had cornered the market on this kind of thing. Sigh. Thanks for bumming us all out, Ken... I can see it now: Tinpan alley transformed into... A DKNY WAREHOUSE STORE!!!

Hi ken mac!
Yesterday I received - by surprise - the "Blogging Friends Forever" Award for my photography.
According to the rules I can now myself give this award to 5 other bloggers of my choice.
I have chosen your blog as I like your narrative approach.
Please visit my blog and you will see your name among the 5 in question. Then it will be your turn to give the award yourself to 5 other bloggers of your choice, according to the rules you will find indicated there!
Greetings from Ystad!

Well, one thing, I do like the new CBGB logo without all that tagging. I detest tagging and graffiti as much as I detest the designer chain shops and restaurants.

Wow, and here I thought this sort of affluent "wannabe hip remembering the old days" were only stationed in the suburbs. On the downside to a cleaned up look,the premmisis will be inundated with suburban princesses reliving what they only have heard stories about. I feel for you.

Well said. I've seen this happening in th cities in the UK. Too common a disease.

Ken, Thanks for the recent comments on my blog! I live on Bleecker in the West Village and what has happened to the blocks between Christopher and Bleecker's terminus at Hudson/8th Ave. is disgusting. How many Ralph Lauren's and Marc Jacob's do we really need? I hardly know my own neighborhood now.

As a small business owner i live through the bs that Mayors Rudy (the real culprit in transformong NYC into what it's become today)/Moneybags have done to this once great city.
You can't fight the greed of landlords when companies like Starbucks/McDonald's/CVS/etc are paying 2/3 times the going rate for rents.
btw the Velvet Undergtound never played CBGB's.

interesting article. I would love to follow you on twitter. By the way, did any one learn that some chinese hacker had busted twitter yesterday again.

I am often to blogging and i really appreciate your content. The article has really peaks my interest. I am going to bookmark your site and keep checking for new information.