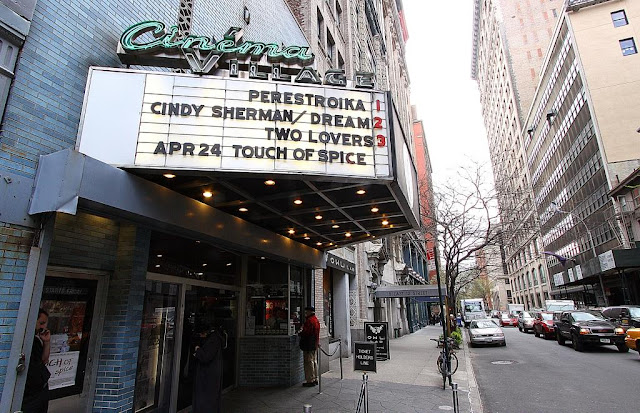 “Through most of its first three decades of life Cinema Village was one of Manhattan's several repertory cinemas. Showcasing a canon of vintage classics, cult and contemporary critical favorites on double bills that would usually change three times a week, this once essential programming format has now largely died out in commercial cinemas in the city and around the country. Before the video revolution, short of a private film collection, going to a repertory cinema was virtually the only way to see many films after their initial theatrical run. Rep houses like Cinema Village were the autodidacts' film school and favorite haunts of cineastes for decades.

“Cinema Village is proud of its longevity and thankful to have survived the pitfalls that have taken down so many other independent cinemas. Notwithstanding our resourcefulness, our ability to survive is testimony entirely to the New York City audience. We could probably only exist where we are: in the midst of most diverse, cosmopolitan and cine-aware of cities”

Well that's good news KM. Thanks for showing us this jewel.
V

Very interesting and I'm glad that it's still in business. Nice shot of a NYC street, too!

In Japan, many movie theaters have closed or rebuilt.
Thanks for nice story and photo.

I like this place. Have seen movies here over the years!

Another great find. I'm in love with all these old neon signs in NYC - do you (or anyone else dropping by) know who is responsible for them all? Having snapped a fair few across Manhattan I wouldn't be surprised if they were all the work of one or two firms - such a distinctive style.

Nice blog... stumbled on it and as per so many add that I too love this city.. been there twice and would jump at the chance again....

It is always very nice to see your photos, Ken Mac. You did a good work documenting the life of Greenwich Village.

Thank you for your recent comment on Versailles. This kind of cinema is fast disappearing and it's good to know that some will survive.

What a lovely store front. Great picture! I really love the red in the picture.

This is my kind of place! The Film Forum & the Walter Reade Theater @ Lincoln Center have my membership support. I almost like everything they play. Have to check that one more ofetn!

Those buildings on the right almost look like they are tipping over. Makes me dizzy... kinda.

hi blogger,
Nice blog you have been posted, the photos of NYC is really good, thank you.
PVR Cinemas, Innovative Multiplex.

I usually go with my family to a some village specially because we like to know the people and the places. I believe the people are more helpful and kind than people of the city.
I love to go with my couple, he usually buy viagra and we enjoy too much our privacy.

I love the village where there aren´t a lot delincuence, I prefer the quiet place and with too much vegetation. That is why i was interested in this blog, is really interesting and helpful. Actually i was looking houses because i am really interested, and i found costa rica homes for sale i think is wonderful.

It was very interesting to read about this in your article. blood pressure