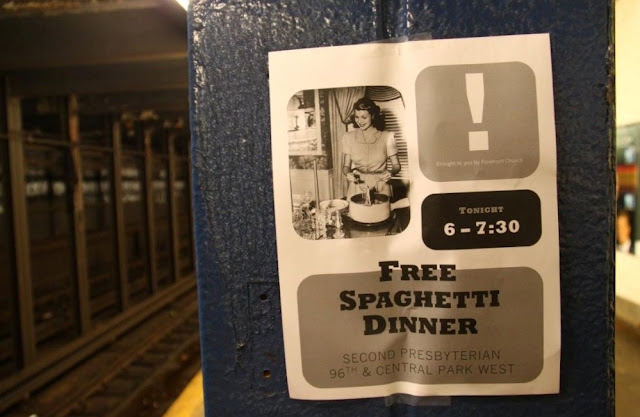 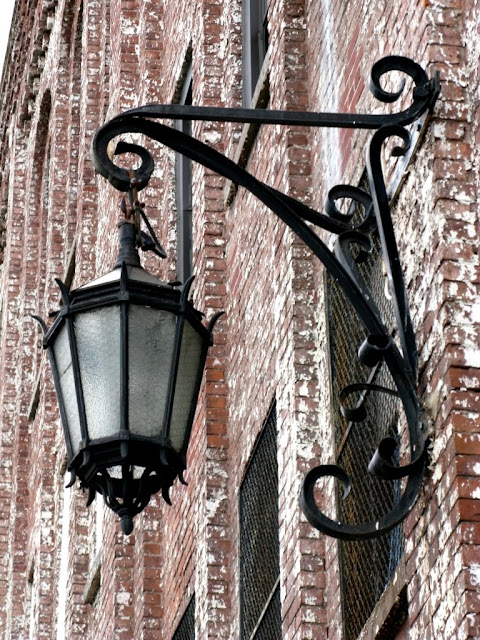 463 West Street is a 13 building complex located on the block between West Street, Washington Street, Bank Street, and Bethune Street. It was originally the home of Bell Telephone Laboratories between 1898 and 1966. For a time, it was the largest industrial research center in the United States. Many early technological inventions were developed here, including automatic telephone panel switches, the first experimental talking movies (1923), black and white and color TV, radar, the vacuum tube, the transistor, medical equipment, the development of the phonograph record and the first commercial broadcasts including the first broadcast of a baseball game and the New York Philharmonic with Toscanini conducting.
The site was also the home for part of the Manhattan Project during World War II.
After two years of renovations by Richard Meier, the building was reopened in 1970 as Westbeth Artists Community, a haven for low to middle income artists. In addition to affordable artist housing, the complex contains a theatre, an art gallery, and a synagogue. It was declared a National Historic Landmark in 1975.
This old lamp adorns the building facing West Street.
Posted by Ken Mac at 1:32 PM 19 comments: 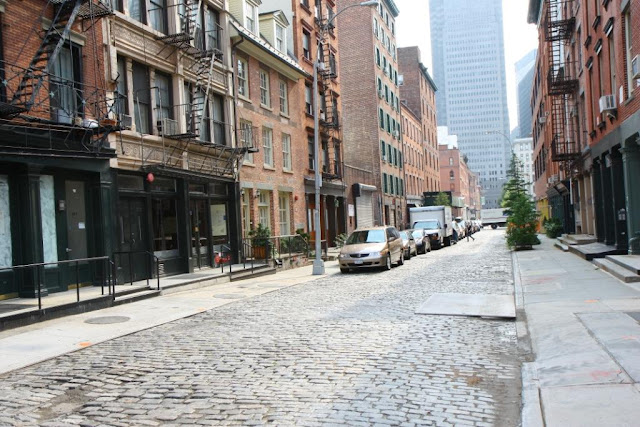 Most of South Street Seaport in lower Manhattan resembles outdoor shopping malls the world over. But if you wander down the slowly vanishing non-commercial side streets you can stop time, circa 1900. (Wall Street evil lurking in the background..run, hide)
Posted by Ken Mac at 12:10 PM 22 comments: 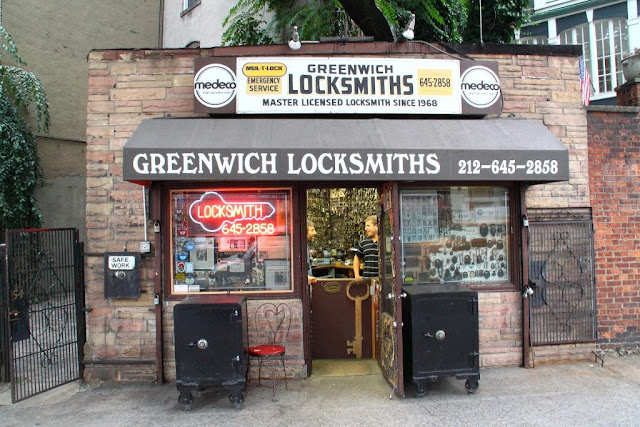 Essential services. We need more of these in the Village. Not more Marc Jacobs, Kate Spade or Fro-you shops, but day to day necessities supplied with a smile. (See? These guys are smiling)
Posted by Ken Mac at 2:53 PM 27 comments: 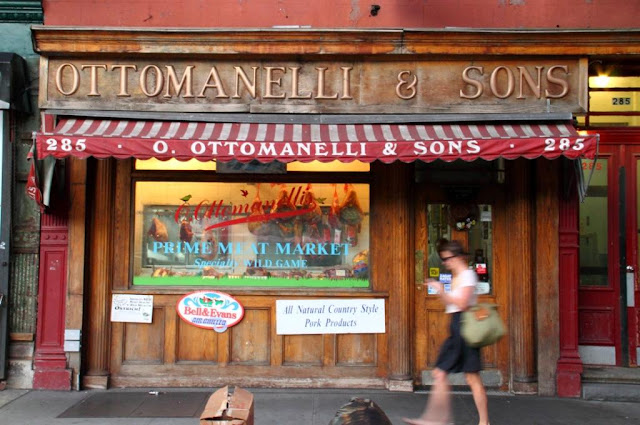 Ottomanelli’s is a classic, one of the last of its kind. When they opened eighty or so years ago on Bleecker near 7th there was a neighborhood butcher in every neighborhood in America — now it’s a rarity in New York, an anomaly in most places. Ottomanelli’s was one of the first butchers to source free‐range poultry and pasture‐raised meats, but the real contribution they make is their practice and maintenance of what has become a severely endangered set of skills, of artistry really, that bridges the wide gap between the animal in the field and the food in the pan. Frank, Peter and Jerry hand‐cut the best fresh meat and poultry in New York for over 35 years, and with all due respect to the creativity of the chefs and the perseverance of the farmers, these guys are the unsung heroes of the Slow Food movement. They are a real treasure.
Posted by Ken Mac at 2:27 PM 29 comments:

Rolling on the River 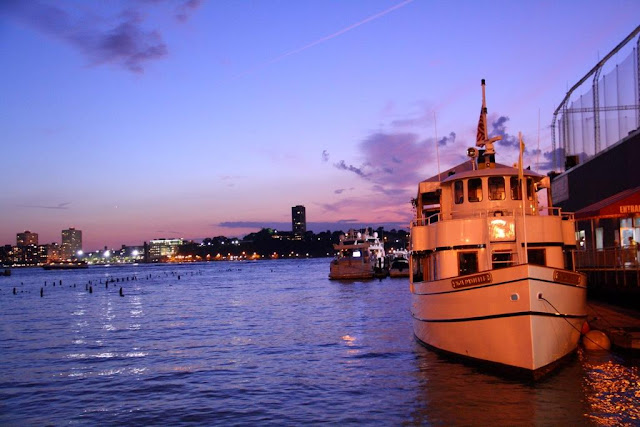 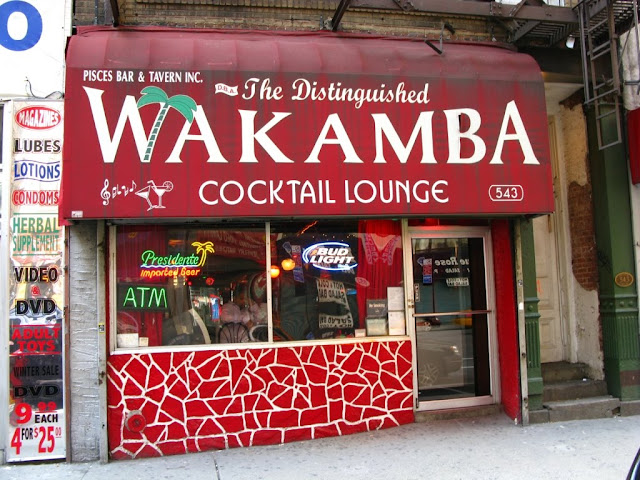 In 2000, this nautically themed Port Authority dive ignited a political firestorm when cops took security guard Patrick Dorismond for a drug dealer, mistakenly shooting and killing him. Mayor Giuliani made matters worse, releasing Dorismond’s sealed records and saying he was no altar boy—when, in fact, he once had been—at Rudy’s very own Catholic alma mater. Still one of Hell's Kitchen's great dive bars at 37th and 8th Avenue.
Etymology
The term “dive” dates from London in the 19th century, when young men wanted a livelier place in which to spend their afternoons than the gentlemen’s clubs frequented by their fathers. They formed informal clubs, where they gathered to smoke and drink coffee.[citation needed]
The Shorter Oxford English Dictionary indicates that, in the United States in the 1880s, the term referred to an illegal drinking den or other place of ill repute, especially one located in a basement.
The term may also refer to an opium den.
Posted by Ken Mac at 2:46 PM 19 comments: 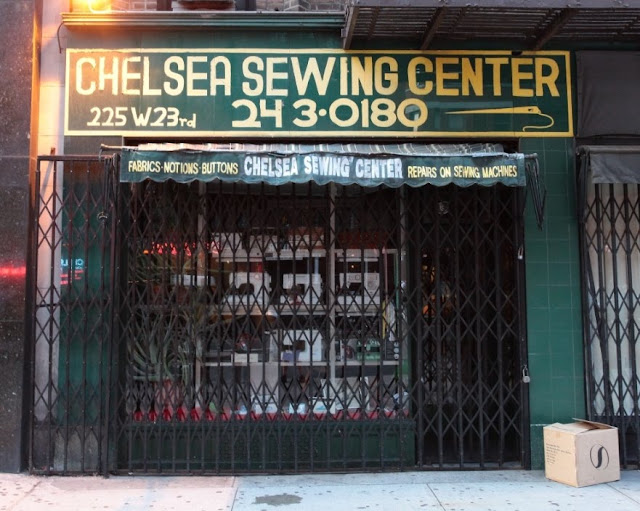 West 23rd Street lies in a time warp between 1944 and 2009. 'Progress' has hit the hood like everywhere else in Manhattan, but here and there survivors of working class NYC (and its literary offshoots) remain.. as in Chelsea Sewing Center's call to another era when people made their own outfits... 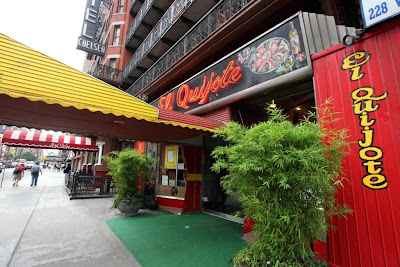 The impossible to photograph El Quijote... 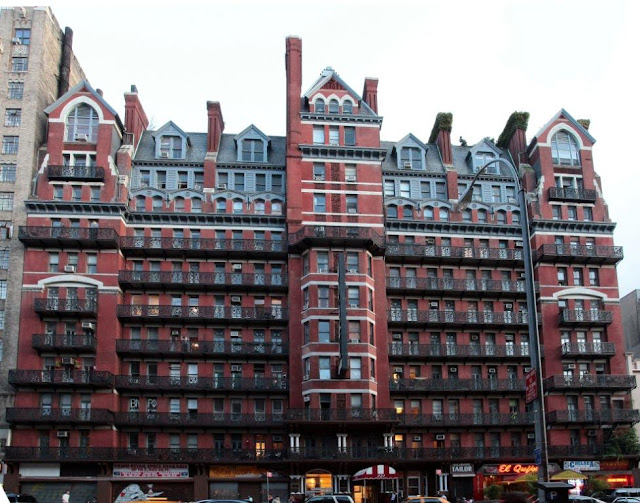 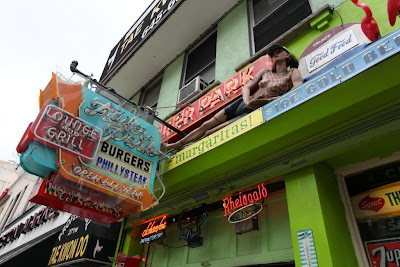 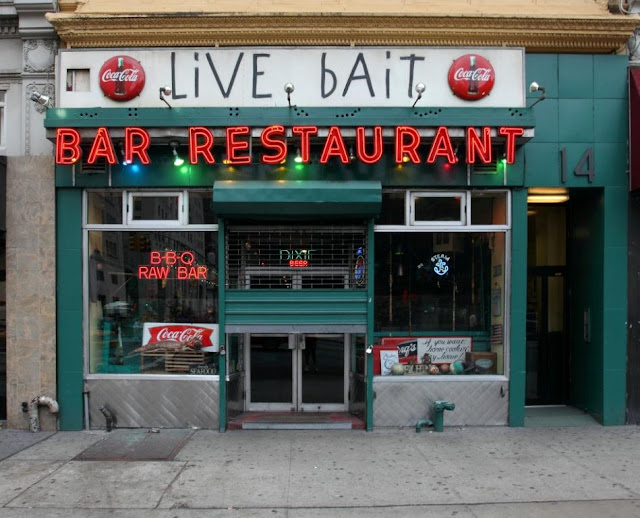 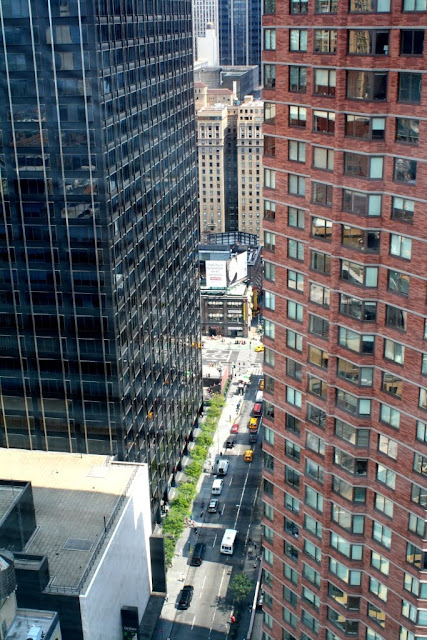 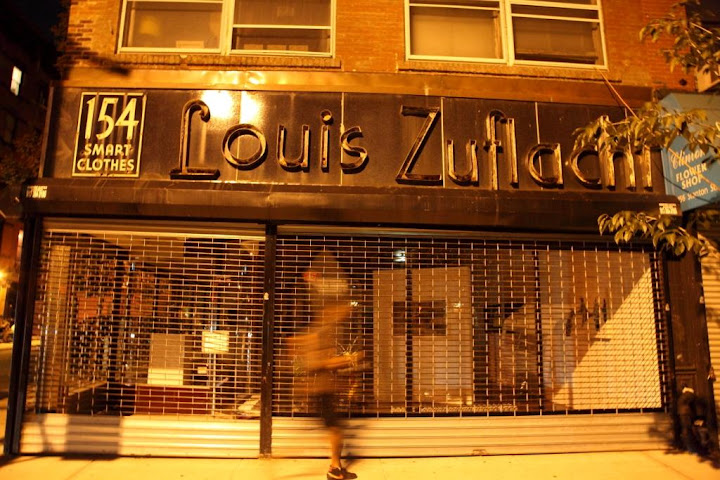 I can find very little history on this old clothier at 154 Stanton except that his "garments can be tested before use," as mentioned in an ad for Hasidim in need of, well, garments. Located in the seriously gentrified Lower East Side, at least they held on to this magnificent sign. 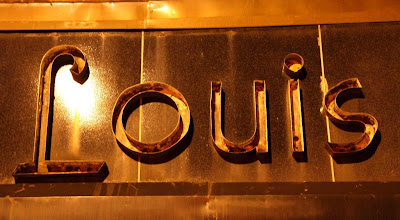 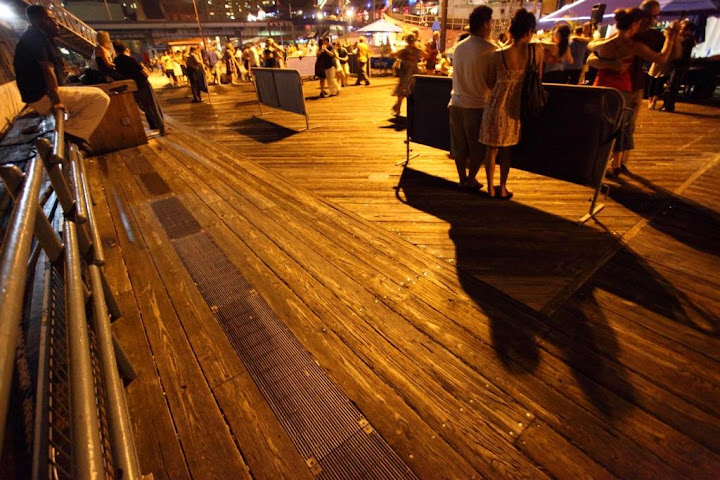 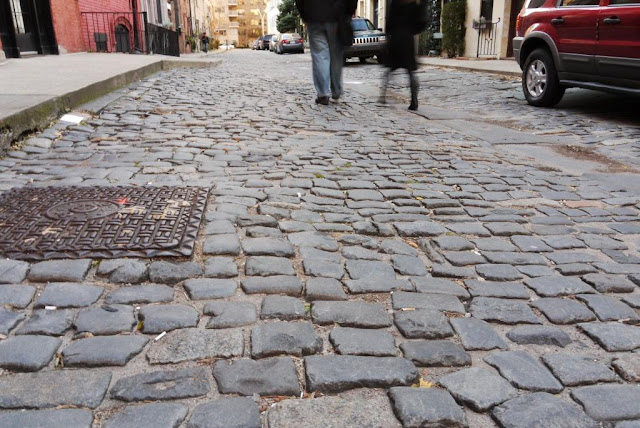 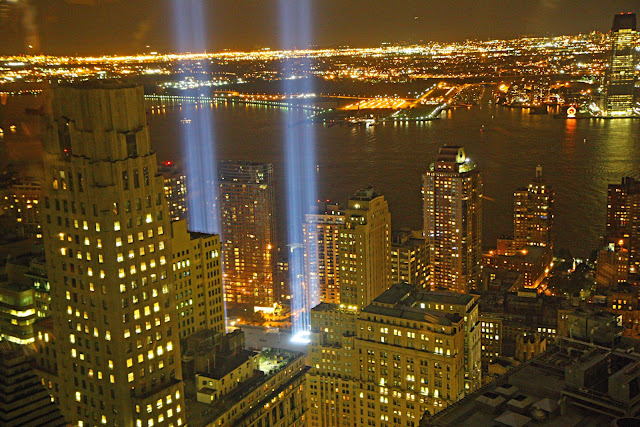 Photographed from the 55th floor of the Chase Manhattan Building, two blocks from Ground Zero. Remember our fallen heroes.
Posted by Ken Mac at 10:32 AM 27 comments:

IN 1931, the St. George was New York's largest hotel, with 2,632 rooms spread out over the full block bounded by Clark, Hicks, Henry and Pineapple Streets in Brooklyn Heights. Now it is divided into multiple parcels in multiple ownership, including a student residence, an Art Deco tower, a fire-damaged section -- and the shell of a new building. Although there are approved plans to rebuild the section swept by fire in 1995, the project appears to be stalled.

Capt. William Tumbridge, who was born in Cape Town in 1845 and who served in the Union Navy in the Civil War, built the original structure on the north side of Clark Street, between Hicks and Henry Streets, in 1885. The 10-story building, designed by Augustus Hatfield, must have been one of the tallest buildings in Brooklyn Heights.

In 1895, Tumbridge was fined $25 for slapping and punching Ira Morley, a broker, who had no money to pay his hotel bill. And in 1901 Tumbridge was arrested for disorderly conduct after assaulting a policeman in a quarrel on a Gates Avenue trolley car. 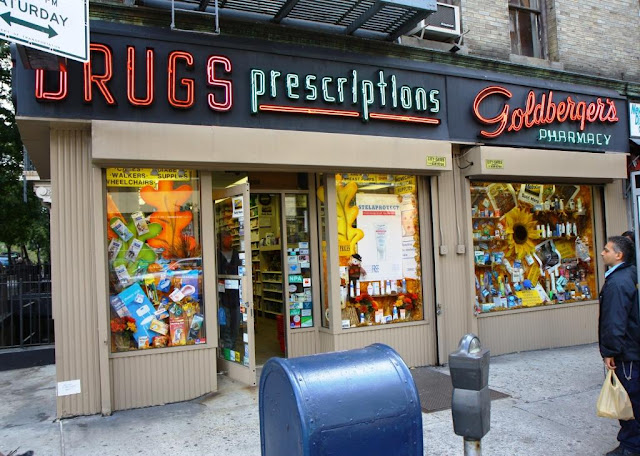 Located at 1200 First Avenue and 65th Street, Goldberger's Pharmacy has been in "business for over 100+ years (since 1898), providing our patients and customers an excellent quality of pharmacy care, service and products, while maintaining your confidentiality." All that and great neon too...
Posted by Ken Mac at 4:07 PM 24 comments: 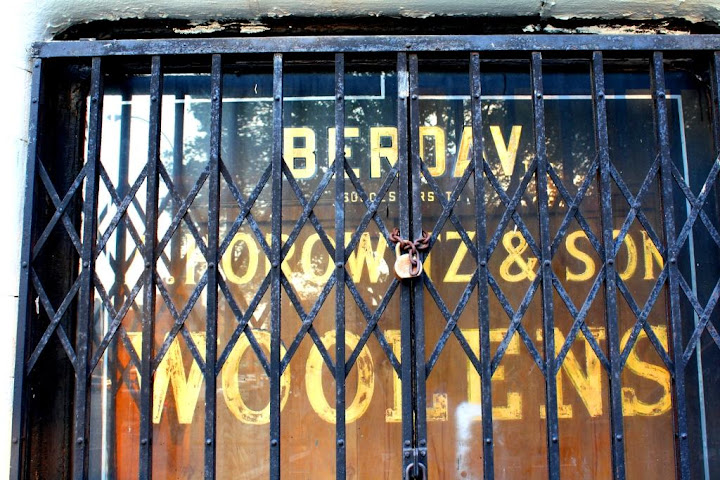 at 139 Eldrige Street, Lower East Side, on the ground floor of a large, apparently abandoned church. Looking around online, I found that Horowitz and Son sold goods here circa 1902 before they were run out of business and sued by the much larger American Woolen Company of New York in 1913. I also found a New York Times marraige notice for Bennett Horowitz, son of Barnatt Horowitz, "woolen jobber." And this is all that's left. Behind gates and lock and key. 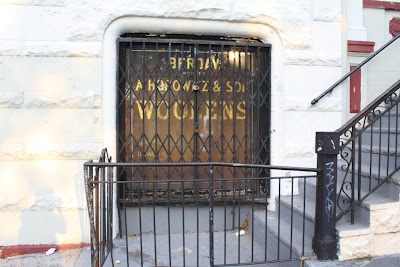 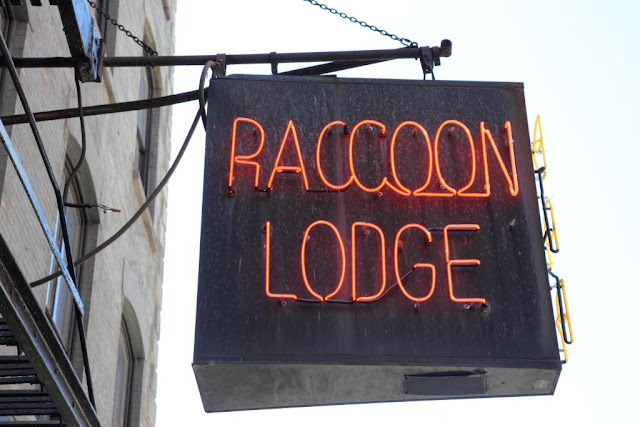 More than just a neighborhood standby, the Raccoon Lodge (on Warren Street, 4 blocks from the former World Trade Center site) was a beacon for workers at Ground Zero; the bar re-opened two weeks after 9/11, one of the only operating businesses in the area at the time. A large, high-ceilinged space, lit by pseudo-stained glass lamps and just noisy enough to create a pleasing din, it remains a bastion of maleness (old signs and dead animals dominate the walls; video golf and shooting games create their own play area to the side of the billiards), with nary a cosmo in sight. Scuzzy in all the right ways, this unaffected dive earns its credibility with lowbrow beers, scary bathrooms, hunting lodge-meets-junkyard décor and a not-for-amateurs pool table. A comfortable back nook has a few tables away from the raucous crowd so customers can enjoy the roaring fireplace and stills from The Honeymooners (for which the bar is named, Ralph Cramden spoke fondly of visiting the Raccoon Lodge). The cheap drinks are prepared with sass by long-limbed bartenders in skimpy tank tops who aren't above flirting with Wall Street professionals, Tribeca residents, and Downtown tourists. — Jane Lerner 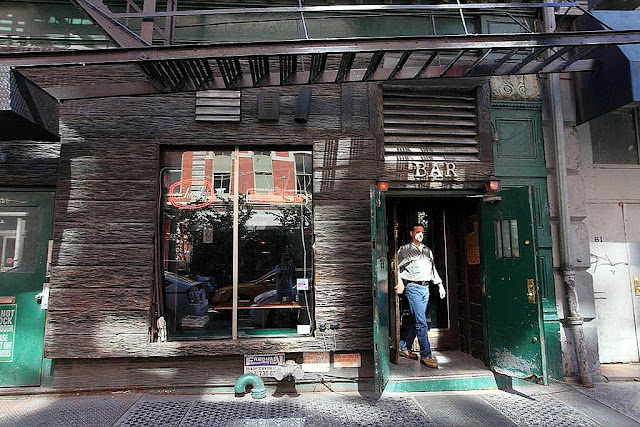 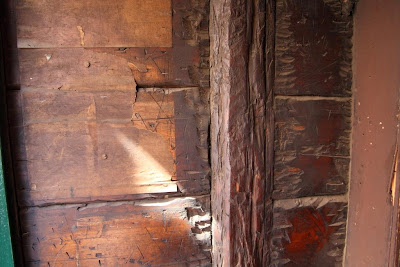 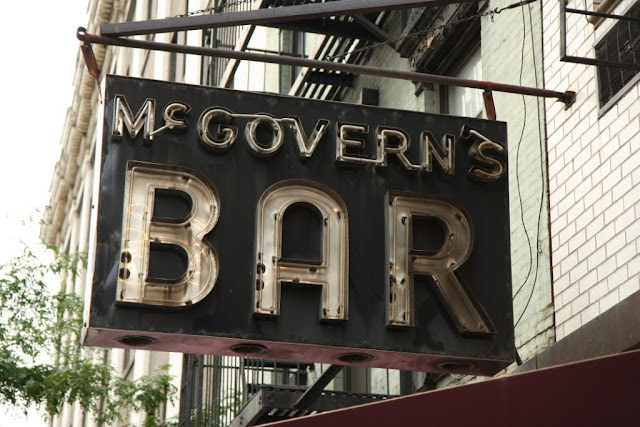