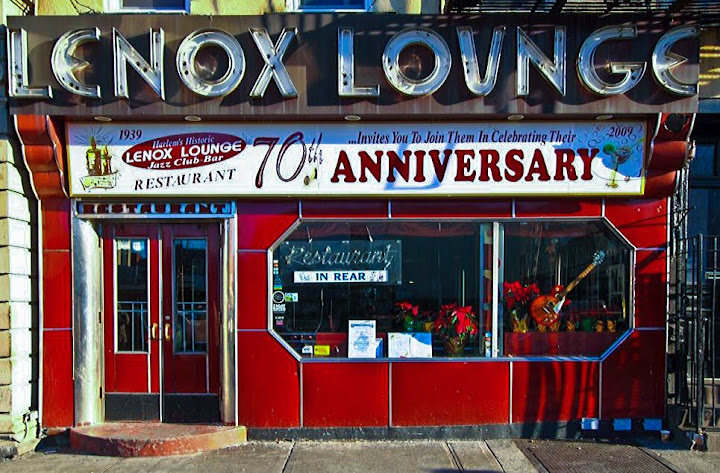 Lenox Lounge is a long-standing Harlem bar. It was founded in 1939 and served as venue for performances by Billie Holiday, Miles Davis, and John Coltrane. Harlem Renaissance writers James Baldwin and Langston Hughes were both patrons, as was Malcolm X. The Lenox Lounge featured as the hang-out of Detective John Shaft in the 2000 remake of the film Shaft. Both the exterior facade and interior of Lenox Lounge were featured in the film American Gangster. In one scene Denzel Washington's character, Frank Lucas, meets with Nicky Barnes, played by Cuba Gooding Jr., in the renowned Zebra Room at the Lenox Lounge. Lenox Lounge has also been featured in AMC's Mad Men. Last drink to be served New Year's Eve. New York...disappearing...fade to black.. Richard Notar, Managing Partner in Nobu Restaurants, will be taking over and plans to open a new spot named "Notar Jazz Club." Former owner will remove and take all signage.
Posted by Ken Mac at 1:00 PM

wow....will you be there to toast in the new year and the end of an era??

i did a quick search and came up with this tidbit from the NY Daily News:
>>>"I'm sad about it, but I'm realistic. I can't do too much about it," he said. "I'm more concerned about Lenox Lounge existing even if it exists without me."

"There's no way I can do that...I'm not mad. That's their business decision They wanted to make some money," he said, adding at least nine different groups have come to "look at" the 74-person capacity space on Lenox Ave. near W. 125th St.<<<

What a classic facade.

That is a beautiful shade of red. I hope the next owners preserve it.

Don't worry. Have no fear. When one bar dies another is born. I'd love to sit at the bar for a pint one last time though.

With all that history, I can't believe the new owner will dump the name and facade. And I can't believe a 100% rent hike. What the market will bear, I guess. The hell with humans.

Current owner will be taking the sign with him..

Maybe the next one willlast 73 years as well - but hardly as colourful as this one seems to be.


This is such a nice addition thanks!!!
غلا الروح
شات صوتي