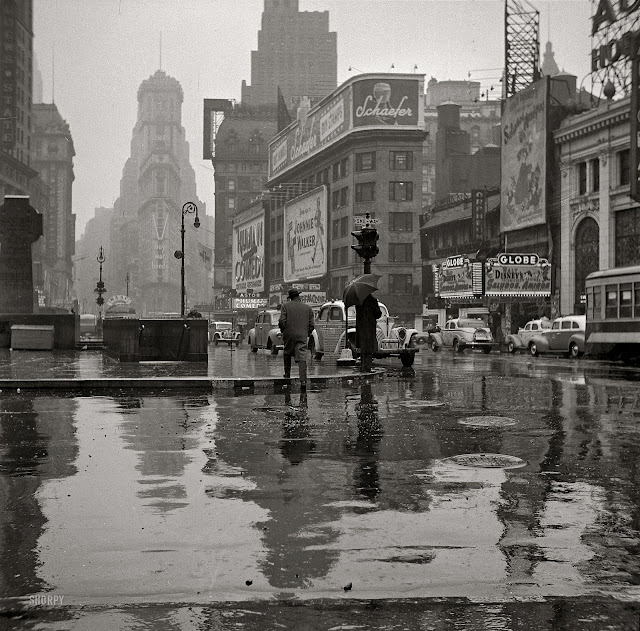 Much has been made of the "new Times Square," where you can grab a lawn chair and watch the neon go by. When I think of Times Square I think The Sweet Smell of Success, James Dean, Midnight Cowboy, Howard Johnsons and the nearby Broadway theaters, those iconic things that make New York extraordinary and frankly, different from anywhere USA. But the new lawn chair esthetic does away with New York grit, with the throb of urban activity that helps mark our great City. So which do you like better, the amazing circa 1950 LIFE magazine photo above (Shorpy.com) , or the lawn chair experience depicted below?

From Chris Flash: "For better or worse, the old Times Square represented genuine indigenous New York culture created and run by New Yorkers for New Yorkers. Tourists and visitors came to NYC just for that reason: to experience the REAL New York City, the best and the worst of it. Not the corporate homogenized shell that has been created by non-New Yorkers for other non-New Yorkers."
Posted by Ken Mac at 8:03 PM

What wonderful place in the golden fifthies!

But we must yield to new times. Unfortunately, nobody can return the clock ...

I love the monochrome. I don't think digital can do that.

No question Times Square was better in 1940s because there were far fewer cars on the road. I'm actually of two minds because I'm anti-car in cities, though Times Square does lose something with the absence of cars, but in the long run it will be far better off. The lawn chairs won't last long if the city puts in good benches and bike paths.

Lawn chairs, no lawn. I like it, given the present-day alternative.

They fit with the mindless-instant-gratification-disposable-Disney-Starbucks-Gap-i-fication of NYC.

I'd rather see real park benches.. also some planters and bike paths.

Could be a good public works project for local artisans.

NYC did a great job with the mosaics and artwork in the subway...

The former, all the way.

Lawn chairs belong on the lawn.

Besides...if they're gonna go green and parks-y, then plant some grass.

Top photo is indeed a better look hands down.
& there is something about the lawn chairs that bother me, yet I love that there is less traffic.
there must be some solution, I hope!

It's a damn shame. I like the older version much better.

I like the old times square much better than the second one!

The top image is much more pleasing for all the right reasons. I'm all in favour of turning some streets over to cyclists and pedestrians. But the lawn chair thing is just tatty. Hopefully that phase will pass quickly.

The first one is obviously stylish and beautiful while those chairs in the second are a bit tack, but what can we do? And would you like to live in the 50s by the way?

Voting for no chairs in Times Square. The concept is noble but Times Square has a life of its own which is bigger than ever rest and relaxation.... if you want to relax and chill then go to a Park, Times Square is an icon of chaos and noise. It is as you say what made it Great...

The Firs One Is So Neat And Beautiful..Now This Is Very Crowdy And Real Beauty Has Eloped Some Where..Sad..Also I Have Started My Own Website And Would Like You To Have A Look At It.I Would Love To Have Your Comments On That Also.Unseen Rajasthan

It has to be without chairs, it is rapidly losing it's edge if people need to sit down in a place like that. That LIFE magazine photo was a great find too - thanks for the reminder.

Hey, Joo, here's what we can do: throw Bloomberg out. That should take care of a lot of lousy things that have happened to the city.

And why wouldn't you want to live in the 50s? On balance, it was a damn good time to be here. Great economy, cheap gas, less crowded, better clothes....

Of course I love the 50s shot! I always prefer the old to the new. It's not that I mind the newer one with a gazillion people or even the lawn chairs, but the signage is so garish. Seriously, must there be a sign on every square inch of vertical space?

OMG..WTF
the older photo is great-love the black and white and mood- of the photo-that was a different New York Time!Grittier--madder--

The top photo is a great place to visit, but I wouldn't want to live there. Looks kind of hard and mean.

Quite a contrast! The chair experience is great and the LIFE photo is fantastic!

I'll take the old Times Square any day, with all it's crime and filth, just the way it used to be...

jesus, is that really the same view? new york has become so New York-phobic!

...and the double-wide stroller just makes that second pic.

No surprise here - I prefer the top view. But I prefered the modern one with the traffic and buzz, not this bizarre post-traffic concrete and neon park. Its like Buckingham Palace without the guards. Its just not right!

I'm all for non-polluting traffic and less vehicles, but the current image makes me sick.

The old image is a beautiful moment in an unspoiled city. Times Square has now been invaded and occupied by clueless tourists. The entire square is devoid of anything that looks or even remotely resembles New York City.

For better or worse, the old Times Square represented genuine indigenous New York culture created and run by New Yorkers for New Yorkers. Tourists and visitors came to NYC just for that reason: to experience the REAL New York City, the best and the worst of it. Not the corporate homogenized shell that has been created by non-New Yorkers for other non-New Yorkers.

I like your slice of New York very much. Great stuff.

Because you definitely deserve it, you are the recipient of the Honest Scrap Award, coming from my blog, Tampa Daily Photo. This is a very prestigious award and you should be proud.

Please pick it up at http://tampadailyphoto.blogspot.com

Have a glorious day in the Big Apple and thank you for your blog.

Quite a statement from Chris Flash..... but it should be applied to the world in general and not only NY.... Globalisation has brought non indigenous people into areas and alot of these places have lost their "uniqueness", "soul" and "culture".... also couple that with commerce, greed and power and then you have the problems in many cities around the world today...

How perfectly dreadful! The idea of returning to New York one day gets less and less appealing with every passing day. The New York I knew was absolutely New York; that scene could be anywhere. And it's so tacky!

I can see the appeal to areas where vehicles are not permitted. But from what I have seen from photos (I haven't been to NYC, yet), the sidewalks are wide enough for all pedestrians.

So now I wonder why this was done and what it accomplishes. Besides ruining the urban feel of this area that is.

Classic Americana, webbed folding lawn chairs. the least they could have done is added some classy cafe style table and chair sets. Proof that change for the sake of change doesn't always work out.

Is it too late to unsuburbanize Times Square?

Everyone, we can lovingly recall the 40s, but between then and now stand the 80s where change needed to happen. This is just the square's natural progression.

As NYers, do you you really go to what I call "the zoo" other than for a show? And even then, do you actually go through the square or around it? I'll avoid the comedy club and tour bus pushers but flanking the tourist Mecca.

I'll never understand all the nostalgia people (not native New Yorkers) have for the days when Times Square was a filthy, crime invested cell pool occupied by the dregs of humanity. It was horrible, dangerous and scary. Most of the who mourn the loss of the "real" New York weren't there and if they'd ever set foot in circa 1970 Times Square, they'd never have survived their visit.

Lawnchairs? Reminds me of Depeche Mode's Enjoy the Silence.

I'll take Old Times Square anyday.
1920s,30s,40s,50s,60s,70s but not this crap. What's going to happen when some nutjob decides to machine gun some of these sitting in the middle of the street smiling like an idiot? Or worse, an out of control automobile plowing into a bunch of sitters?

Someone do something please.

For better or worse Manhattan is an extremely dynamic city that changes all the time.

The downtown skyline used to be a lot nicer before 1960 hit too. And they tore down Penn Station, the original Madison Sq Garden, and the list goes on.

If you look at the old pictures there was once a time where people parked their cars directly within Times Square. Imagine Times Square a parking lot.

jesus, is that really the same view? new york has become so New York-phobic!

Very nice article, exactly what I wanted to find.

Here is my site ... Diets that work