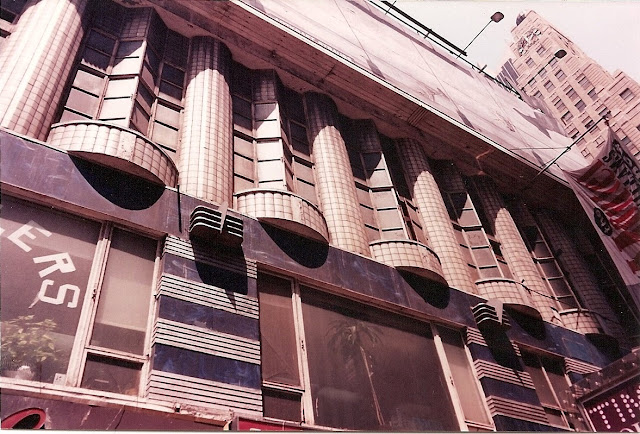 NYTimes: It was apparently the largest glass block facade in New York City, an unusual Art Moderne theater of blue and white glass with streamlined aluminum fins. Above a first floor of unexceptional storefronts, the second floor was composed of alternating deep blue glass with white marbling and strips of metal. Above these were protruding aluminum fins similar to those found on engines and other mechanical equipment. The third floor was composed entirely of cream-colored glass blocks in alternating curved and faceted bays. 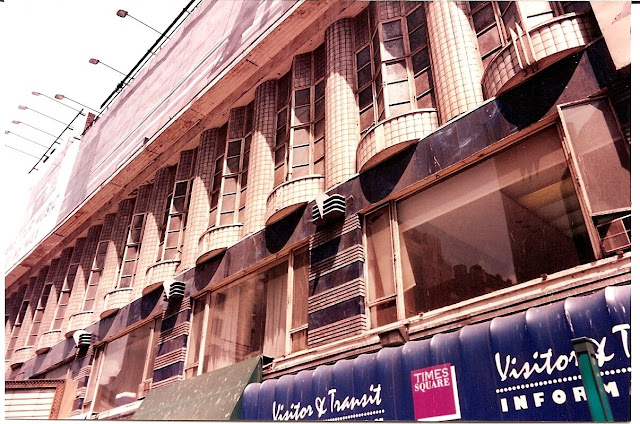 The Rialto opened for Christmas of 1935 with Frank Buck's ''Fang and Claw.'' The theater's manager, Arthur Mayer, saw the Rialto as distinctly masculine in tone. Most theaters, he said in a newspaper interview after the opening, were ''rococo, luxurious palaces for the uxorious,'' both in styling and choice of films. His theater, both in styling and presentations, sought to satisfy the ''ancient and unquenchable male thirst for mystery, menace and manslaughter.'' He was soon called the ''merchant of menace.'' 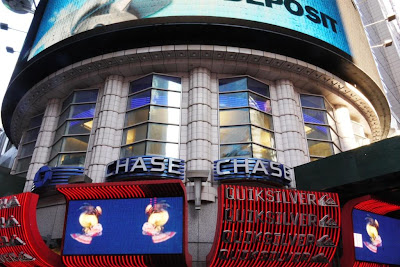 Located at 1481 Broadway, between 42d and 43d Streets, the old Rialto Theater was originally built in the 1930's to show first-run films. It was successful for a time, but saw its fortunes wane with those of Times Square, ending up as a pornographic-movie house by the 1960's. Attempts at rebirth followed, like a short-lived return to live theater and another spell as a legitimate cinema, while television studios upstairs featured Geraldo Rivera, Montel Williams and even Jane Pratt, the editor of a teen magazine (called Jane) whose television show (also called ''Jane'') bombed in the early 1990's.It sits on what will be the site of the new Reuters building, (the state owns all the land beneath the building.) The Old Rialto Theater is doomed, soon to be replaced by a 32-story corporate tower.

I had noticed the rounded exterior but had no idea what it was before the Disneyfacation of Times Sq. I think that 'bridge' outside has been there forever .. I used to do all my banking there til I decided it was more time efficient to bank online ..

The rounded area you show in the contemporary shot is original? I'm starting to see a starring role for you on the NYC conservation board. (?!) KENMAC FOR CONGRESS

no, the contemporary shot is all plastic...

Give me the old faded urban deacying beauty over plasticoated cleaned up and vacuous new any day.

I've never been there, but I would like to meet this place, it looks really nice, thank you so much form this post...

Thank you for joining us. his article is very helpful