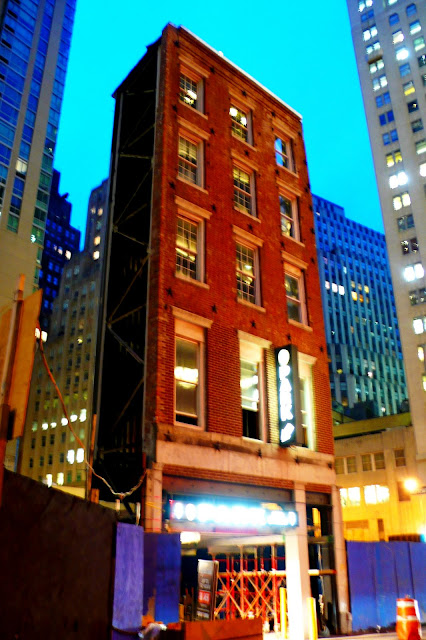 Witness a survivor. This lone facade at 211 Pearl Street in the Financial District was declared landmark status last year, after a long battle. The New Yorker and other publications chronicled the building's unusual tale: built circa 1840, it passed through various hands and businesses, was rumoured to be the birthplace of Herman Melville, and when its destruction was eminent, a weird, seemingly occult symbol was found buried in a load bearing wall. No one knew what the oblong shaped triangle meant, and each of its side was inlaid with a different material. Anyway, it was found that the developers were using state grant money to destroy, then rebuild the site, and was thus 211 deserved local review: landmark status. But only for the facade! So now when you walk down Pearl Street you see this ancient facade tacked to the front of yet another sparkling, faceless, soulless, Financial District behemoth. No one ever did figure out the meaning of the symbol, however. 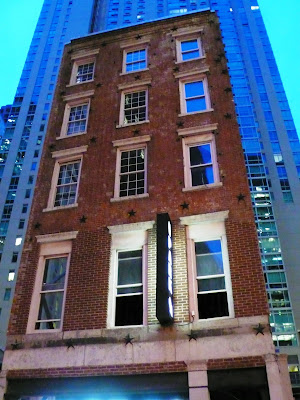 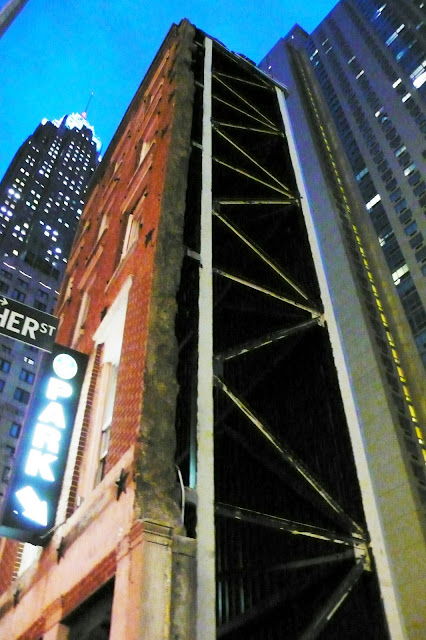 I find this really weird — saving only the facade? What's the sense in that? But it's probably just me…

Anyway, I love the hyper-saturated colors of the first photo. And the tale of the triangle — cool and creepy.

Very cool set of photos, I love the 1st one!
Upper East Side previous pic is awesome!
Very good work!

This phenomenon was cute when it was a new concept. The novelty factor wore off for me long ago.

We've got facades around town propped up by girders waiting for someone to build a building behind them. (I guess that's my cue to get out there)

My preference is to keep buildings with character but I want to see the building saved not just the front of it. Anyone can replicate that facade. It's done all the time in Disneyland and Las Vegas.

I think it's sacrilege and developers and historical preservationists who endorse this are knobs in my humble, crass, ill-advised and ill-informed opinion. The notion that something is better than nothing does not fly in this case.

Oops, flew off the handle again.

On the bright side, it provided material for another of Ken's prize-worthy posts.

Thanks Wayne and I couldnt agree more....

Hi Ken Mac! Here I am to enjoy your lovely blog! And this week we have again some wonderful pictures.
Amazing story...
For some years I was heading for the corner of Maiden Lane & Pearl. Must have seen this one many times... ;)
Look forward to reading you again at Blogtrotter, now back in Chania!
Have a great weekend!

I love it when it moves architecture forward. Like a preserved façade with an extremely contemporary interior, where they play with volumes and push the enveloppe. Where there is a dialogue between the old and the new. That's what architecture is supposed to do, in my mind.

And no, copying a facade à la Disneyland is absolutely not the same. You can always tell.

Now my hate relationship with that. I live in a UWS brownstone, which I am pretty sure is landmarked to some extend. Obviously, not to the interiors. It breaks my heart seeing what the landlord does with it. Like glueing Ikea parquet on the old beautiful but damaged woodfloors. Yeah, it's a rental.

Oy Veh! This is pathetic! If this is not a testament to the shallowness of it all...
Regardless, thanks for the interesting story Ken.

They do it a lot in Portugal, saving the facades. I like the angles of your photos!

Fascinatimg narrative. Got to agree with Wayne about the knobs comments. This si something thank is thankfully not done here, not yet anyway.

I'm with ya Wayne. This facade business is a bunch of crap. Who are they fooling? KM, sorry but I think I'd rather them tear the whole thing down as do something this stupid. Geez , what are they thinking?

KM,
Sorry, I got so huffy I forgot to tell you that your photos of this travesty are excellent.

Ken...The color in the top photo is fabulous! Unfortunately, the concept leaves the building so unfinished and "sarcastic." Your work provides an education.
Lori

I read the article in the New Yorker. It was rather sad. Well, I thought it was sad, because more of the building wasn't saved.

it pains me, how many older buildings are taken down all the time.