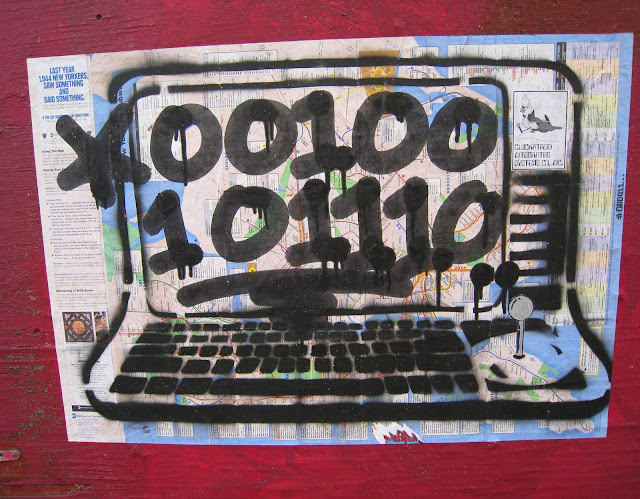 I know some people hate graffiti, but in New York street artists typically turn abandoned walls into works of art -- it's more than graffiti. It's the voice of the people! This weird computer stencil over a New York City subway map used to be on the abandoned tenement at 43 MacDougal Street. I like the 1s and 0s, and the very clever computer and joystick design.
Posted by Ken Mac at 11:39 AM

Some of these guys are very talented. I agree this is a very clever piece.

Some of it pure art. I agree it's freedom of speech, and that should always be heard, especially the ingenious like this.

You should check out Berlin Daily, Oliver. Now he does have some interesting graffiti

This is great. Most of the graffiti I see in Los Angeles is of the standard tagger variety: more about marking territory and less about artistic expression.

I wouldn't even call this graffiti — it's so well done. It's the senseless, artless ones that I hate — like wild animals marking their territory. =(

Anyone here who can read binary? Those digits might actually have a message.

Someone needs to do a blog dedicated to stencil graffiti!

There are some great stencil graffiti artists and a good place to look for their work is between Bleecker and Spring, between the Bowery and Broadway. I heard they come from all over the word to stencil in NYC. We need a blogger to post and report!

I agree, Graffiti is folklore and folkart. It's here to stay.
So many thing people protest are simply ways of life, and people need to take a open fresh look, and chill out.
( or get an education)

THanks for bringing this up.
Hilda, I saw the binary too.. pretty cool!
I thought it was a message that said, typewriters have been replaced by the internet. ( not in so many words)

There is a guy who does graffiti like art pieces on subway maps in SoHo. He's usually on Prince Street, west of Broadway.