NY TIMES: Sender Jarmulowsky arrived in the from in the early 1870's and by 1878 had established a bank in an existing building at the southwest corner of Canal and Orchard, already an immigrant district. In 1886, 1890, 1893 and 1901, he experienced various bank runs but proudly paid 100 cents on the dollar to each panicky depositor. In 1912, with the architects Rouse & Goldstone, Jarmulowsky put up a reserved, 12-story loft building with a bank on the ground floor at the same corner where he had established himself 30 years earlier. 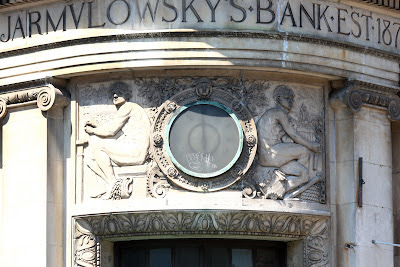 It was, with its rusticated limestone lower section and a terra-cotta upper part, no barebones loft building. The entrance to the ground-floor bank at the curved corner is surmounted by two reclining figures in classical style flanking a clock. Period photographs of the banking floor show a conventional work of marble and bronze; it could have been any well-known uptown bank.

Sender Jarmulowsky died in 1912 as his building neared completion; The Times noted he left "only $501,053" as an estate, apparently expecting much more. His sons Harry and Louis continued the business. 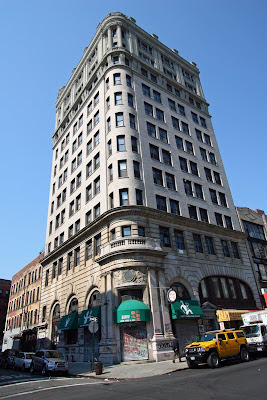 In 1917, as depositors withdrew nearly $3 million to send to overseas relatives caught in the war, the State Banking Department took over Sender Jarmulowsky's bank. It had liabilities of $1.25 million and assets of only $600,000. Over 5,000 depositors crowded around the branch and Harry and Louis Jarmulowsky were indicted for banking fraud later in the year. The bank never reopened and the building was sold at a bankruptcy auction in 1920.
Posted by Ken Mac at 4:56 PM

Whoops, sounds like he cared too much about what other people thought of him — in a superficial sense. Very familiar story...

I enhanched the picture, and I like the detail of its door. Great building. I saw some Asian restaurants doing business on the ground floor!

Thanks for the thoughts Hilda and Harry! This is the old lower East Side so you see lots of former synagogues and the like, but it is primarily an extension of the ever growing Chinatown today.

i realize the comment is 3 yrs old, but I feel I should respond to Hilda's comment. Sender Jarmulowsky was not a vain banker like the institutions today - he was well known for his philanthropy, and his bank was well known for his help to immigrants through his own roots in europe in the process of bringing the rest of their families to America.

I can't believe that a building with that years can stand like the time was just a gust, and the structure is so artistical, the perfect place to start a good historical tour.

The negative comments about the bank failure reflect lack of information and short sightedness. Banks pay interest by loaning money. Traditional banks did not give mortgages for private homes - and not to Jewish immigrants. Today it is considered ok to offer home mortgages but in 1914 it offended "goyish" traditional banks & the NY State Banking commission. No bank can withstand a run on deposits if they do what they are supposed to - loan money on safe real estate to earn money for depositors. Within a few years after the closing the real estate, which was worth much more than the unpaid deposits, or the mortgages were sold and depositors eventually got 100 cents on the dollar. There was no Federal Reserve Bank to "hock" the mortgages and no market in mortgage backed securities to turn mortgages into cash.
Take a good look at today's FDIC and other bank rules -- they only require a bank to keep cash on hand worth pennies on the dollar.
The goyish banks refused to buy the mortgages because they resented the competition - Jewish banks opened Saturday night which was when sweatshop workers got paid; traditional banks opened Monday to Friday.

Jarmulowsky died in 1912 shortly after the bank was completed, and his sons took over the business. unfortunately, they lacked their father’s business acumen and mismanaged the business. In 1914, at the start of WWI, the bank closed as many depositors made “runs” on the bank to get money to help their families in Europe. According to the NY Times, 2,000 people demonstrated in front of the bank. 500 people stormed the house where son Meyer Jarmulowsky lived, forcing him to escape across tenement rooftops. Jarmulowsky sons were indicted for banking fraud and the bank closed.

The article notes that two sons of Sender were indicted, but please note that they were NEVER even tried or convicted. Ergo, the charges must have been dropped. No crime though much scapegoating.

Also be aware that the New York Times reports that all depositors were paid in full after Forced bankruptcy liquidation of bank assets. Undoubtedly the assets of the bank were worth more than received in forced sales.

Also note that Meyer was not one of the sons charged, per the article above.