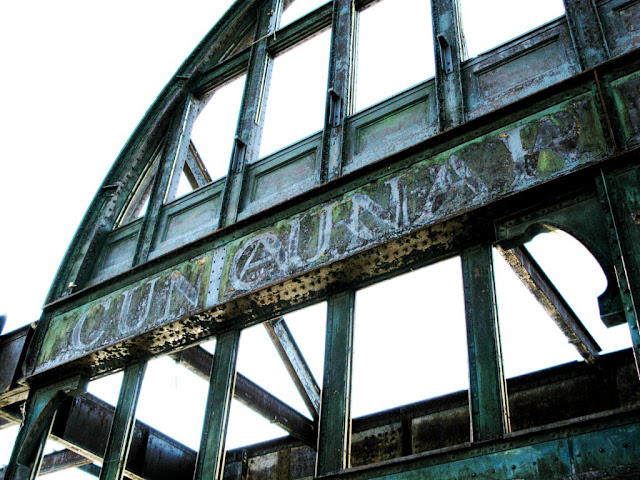 Today, when one ventures down the west side of lower Manhattan, at the foot of 14th Street and near the West Side Highway, there may not seem to be any immediate connection to the great Atlantic Liners of yesterday. However, upon closer inspection, there are many reminders of a bygone era. Perhaps [most significant] is an abandoned pier given the simple number "54". This pier was operated by the Cunard Line. In 1912, this pier was where the Carpathia landed all 705 of the Titanic's survivors. Three years later, this was the pier from which the great Lusitania departed on her last and ill-fated voyage. Pier 54 was just one of a series of piers built along the lower west side of Manhattan. At the time of the Lusitania's maiden voyage in 1907, only a slab stretching into the North River existed; however, the inadequacies of working without a proper docking facility became manifest quickly. In response to the growing size of the Atlantic liners, the city of New York began to construct the piers that would become famous. (from Atlantic Liners) 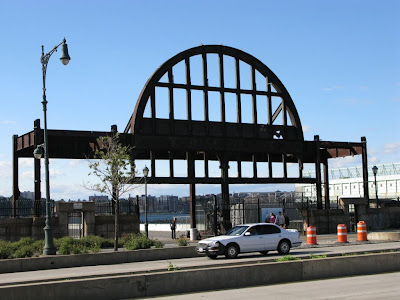 from West Side Highway today 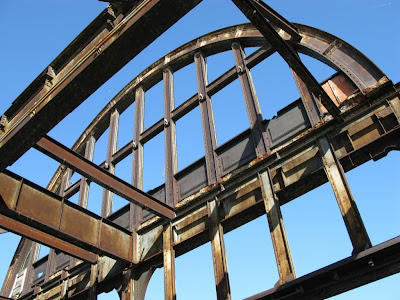 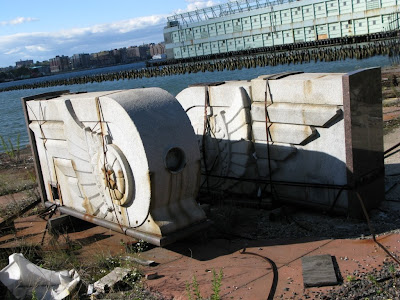 Two grandly carved lintels which no doubt greeted passengers beginning in 1912 -- now forgotten, abandoned, but still beautiful with their wings of promise.
Posted by Ken Mac at 6:49 PM

Oh KM, I read an historical fiction book with my third graders for many years about a boy on the TItanic that saved the Titanic's owner's dog. ( I don't recall his name). What an interesting post. Merci.

I'm still digging for help photographing the Cheyenne. It's here you know, but DAMN, I can't get to it.
V

Kicking myself. I have passed this a bazillions times and never 'saw' it.. what amazing history, thanks, Ken, for opening my eyes

Really great images. Thanks for posting these. Love the post.

Those lintels...I once knew their story and now I have forgotten, so maybe someone could chime in. I don't think they were part of the pier, but we part of something else, like the Lincoln Tunnel. Will see if I can dig up the info as it's bugging me now!

If you'll excuse a cheeky Londoner from intruding, those lintels came from the (collapsed) West Side Highway.

Ah, the West Side Highway - that was it! I knew it was something road-related. I believe there are a couple more of these somewhere and I want to say someone used them on their estate or in their garden, but my memory on this subject is obviously shot.

Those lintels used to mark the entrance to the Miller Highway. The on ramp the capped is still there. If you're driving up West Street from BPC and look at the median in the road just outside the exit of the Battery Tunnel you'll see where the road suddenly ramps up into the air and suddenly stops at a stump. There's are plants and trees growing there now. The underside of the ramp is the entrance to the Battery Tunnel from southbound West Street. There's still some of the original granite from the old Miller on ramp and you can see exactly where those lintels fit on.