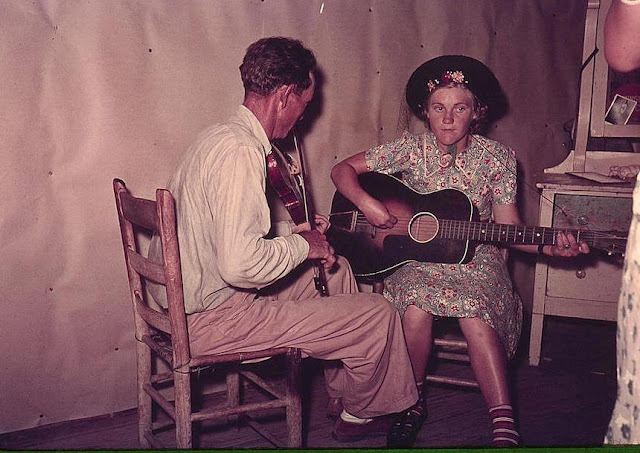 Okies from Muskogee
Posted by Ken Mac at 7:22 PM

Looks like she's playing a C chord. That's a great oldie. Sometimes I wonder if there was less smiling back then. Whaddya think?

The picture fits to the text. Even if I don't know what it means but just suppose.

Let's hire them for our wedding, shall we?

Ya. Got that right! What's the backstory?

Neat photo. It invites me to stare at it and wonder about the music and the musicians. That it is from Oklahoma doesn't hurt it. I grew up about 15 miles north of Muskogee and am in Tulsa now.

I remember when the song came out in 1969. The first time I heard it I was driving around Muskogee looking for something. The DJ said Haggard wrote it in a sarcastic mood after he was busted for pot while in Muskogee. Wikipedia's article is very different, but it was kind of a tongue in cheek sort of thing.

Gosh, Altadenahiker has moved East?? To get to the real west? Jest don' knock them folks. They play the real music and if they need an extra fiddler, I know just the guy to fiddle at your wedding. And banjo, if you can clawhammer, jes' join on in!

love the dress. What's that on her head? She's concentrating. Luvvitt.

Is that "Fiddl'n" Dave Fowler from Omaha, Nebraska?

Youre so cool! I dont suppose Ive read anything like this before. So nice to find somebody with some original thoughts on this subject. realy thank you for starting this up. this website is something that is needed on the web, someone with a little originality. useful job for bringing something new to the internet!