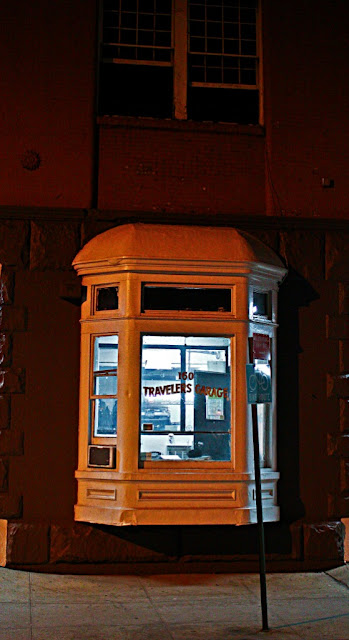 At first I thought it was a British post box. . .v. nice.

Hey Ken Mac! Thanks for visiting...you betcha it's getting cold when I go out to the barn in the morning. Have you made a coffee table book yet? Such an interesting shot. Love the reflection in the one below too.

Edward Hopper? No, it's my artist buddy Ken.

You know as in Doctor Who. lol

It's the fear I have traveling by car... that I'll have visit a garage. hahahaha

Is This the American version of the Tardis?

How does one enter this garage?

Hi again,
Just wanted to say that, although I have lived in a city or two, I am a country person through and through. But you show your city in such a way that I almost like it, and I have become a follower.
Blessings!

Our brand-new DIY travel book, "The Zinester's Guide to New York City", will be out in just a few days and we're throwing a book release party to celebrate. The Greenwich Village Daily Photo is included in The Zinester's Guide as a resource to which visitors to New York should turn. All the fun goes down November 11th at Brooklyn's Housing Works Bookstore, and we'd love for you to join us! Check out all pertinent info below!

If you come to the event, please stop by Microcosm's table and say hello! Microcosm Publishing will be there with a full range of our distro'd and published books and zines.

11/11: “THE ZINESTER'S GUIDE TO NEW YORK CITY” BOOK RELEASE PARTY
Please join us from 7pm-8:30pm on November 11 at Housing Works Bookstore Café for a free, open-to-the-public event celebrating the release of The Zinester’s Guide to New York City by Ayun Halliday! Listen to the Bushwick Book Club performing original songs inspired by the ZG2NYC. Hit the mini zine fair for our contributors’ zines and self-published comics.

Food and drink available for purchase
The book: http://microcosmpublishing.com/catalog/books/3038/
The author: http://ayunhalliday.com/

Several things come to mind when I look at this photo. First i wonder whether or not having this sort of bay window, so close to the sidewalk, is the usual in Greenwich Village. Then I wonder just how many coats of paint are underneath that pumpkin orange, and are the windows painted shut forevermore. Wait! Is that window on the left open at the top? Wow.Then I wonder at the size of the interior and that tiny rectangle on the left that looks like a window air conditioner unit. How does it cool enough to be felt? Finally I wonder about the garage and the fumes that accompany that sort of work. Do they threaten to overcome the person who sits at the desk?

Thanks for this super photo!

Glad you enjoyed the neon and yes, you'd find some pretty good food at those drive-ins. The Cherokee is blue plate, meat and three, at lunch, burgers, fries, onion rings, any time. Walker's is eclectic, fresh, creative fare. Hal & Mal's is sort of like The Cherokee. The Mayflower is famous for its seafood. I've not eaten at Kelly's in Portland. Primos Cafe makes great caramel cakes, and Rooster's in Jackson makes superb chicken fried steak! I don't like the chicken 'n' dumplings at Tad's. I haven't eaten at WC Don's.