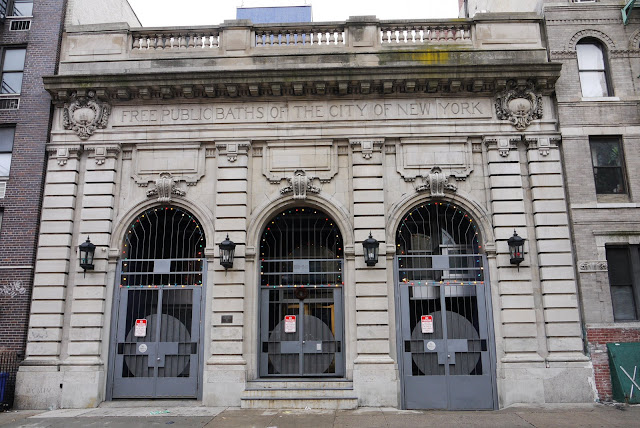 11th Street Public Bath, 538 East 11th St. This elaborate Beaux-Arts style bathhouse, located between avenues A and B, was completed in 1906 to alleviate sanitary problems in the City’s tenements, few of which had baths or showers. The limestone-clad structure was meant to stand out as an example of civic pride. It was used as a public bath until the 1950s, and purchased in 1995 by Pulitzer Prize-winning photographer Eddie Adams and converted into a fashion and corporate photography studio. It was also used as a location shot for the film, Ragtime. 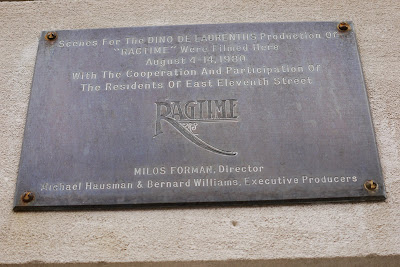 Very cool shot. I'll make a note to go by there one day. Thanks!

With so many homeless on our streets now. This would be welcome sight. Such a handsome structure.
V

I have often wondered about those days and cannot imagine going without a bath like they did. When I am in the bush, the most I can manage is one day, then I find a stream and bathe with the crocodiles. :)

I just can't imagine what public baths were like!

At least this is one beautiful, old NYC building that wasn't torn down! Somehow, it seems right that it's a photography studio now.

Good stuff, Ken. I was curious about who owned this place now...I've seen a few red-carpet-type events happening here. (From the outside, of course!)

Never knew this was here .. nor the naughty girls below ...

Thanks for visiting mine!

and your Avatar? Love Bogey!

Great use for this fine old building, is that solar on top?

What a gorgeous building. I, too, am rather fascinated by the idea of those old public baths.

Women in scanty dress, public bath buildings... your 2009 images have taken on a rather interesting flavor! ;-)

I think that it was a lovely gesture on the part of public health but I'm going to try not to think about what the experience must have been like. Now, bathing in Japanese public baths, that's a different story.

Gorgeous façade! Would love to see the building inside.

Its a fine looking building. I bet it was well used in its hay-day. Its good that it's still in use.

Film trivia, photography, and outdated practises. Great post for me. Public baths died out in the UK in he 60's and those baths have often been used for TV and Brit Cinema. Like V's homeless idea. No one should be on the street, and no building like this should be neglected.

Hey, who can pass up a bath, especially a free one.

KM,
Damn our friend rchrd is GOOD isn't he! Thanks for telling me about him.
V

This building certainly has history, twice! The plaque was interesting to enlarge and read too. - Dave

From the today perspective, I can hardly imagine to take a bath in a public bath...Cause it is for me an intimate process..But it is always an opinion from the next generation....Today, we probably doing something what in the future will be unimaginable...Nice shot!

Thank you Ken Mac for the visiting and comment.

I confess to you that I have been a bit lazy to post... LOL! I am enjoying my break because now I have much time to enjoy my friends blogs that I love, like your blog.
See you soon.

Super cool photo. I've never seen a bath house before, except in movies!

I had no idea Ken! I thought all the public baths were in Japan! lol
Impressed, and curious!