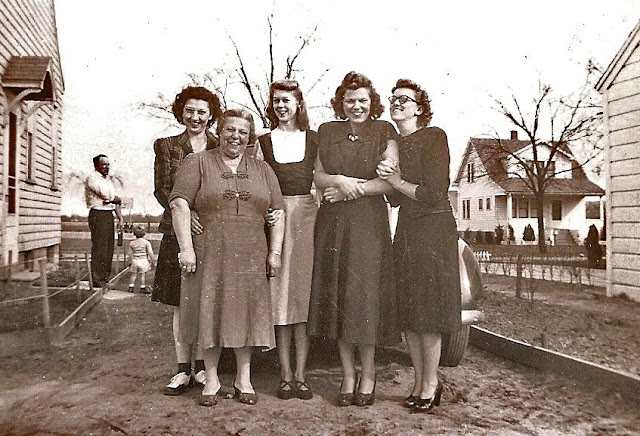 They're adorable. I'm thinking perhaps this is a new house and they're laying the driveway.

They're a happy bunch!

Where's the spaghetti and gravy???

Who's the little one in the background?

Just great your collection of old photos, Ken Mac!
It's inspire me to post old photos too. I have a bunch of them...

And look at all that wide open space in the back. I can't imagine what it looks like now.

Well, actually, coming from northern Ohio, I have a very good idea what it looks like now.

I'm guessing a super-highway and an outlet mall.

It's always a joy to see old photographs. Thanks for sharing.

Yeah, the old stuff is good, even though I don't know the people.

I've only been downtown a couple of times, but Monroe has always struck me as an All-American town. Do you know if it is, or was? Should we include the nuclear plants in the discussion?

Luv this, like the earlier one: the shoes, the dresses, the car and houses, the smiles . . .